The newly launched ‘RadNet’ network is the charity’s largest ever investment in radiotherapy research, and will accelerate the development of advanced radiotherapy techniques, challenging the boundaries of this mainstay cancer treatment through world-first exploratory projects. 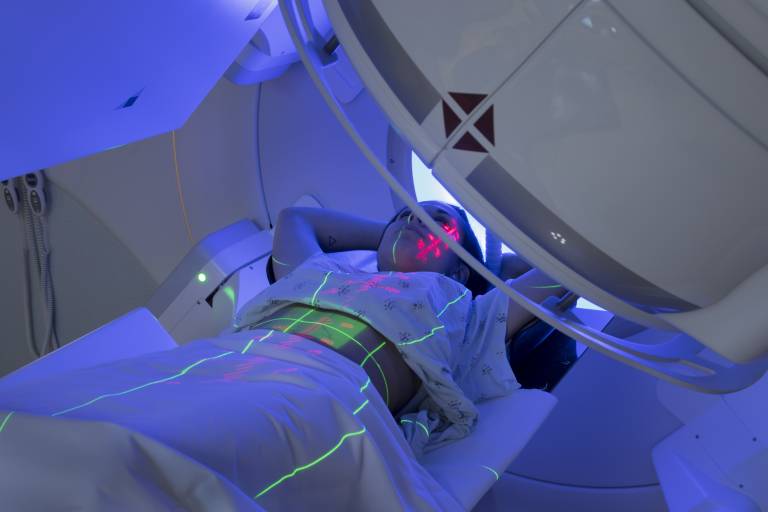 Cancer Research UK (CRUK) has announced a new £56 million research network, set to transform the UK into a global hub for radiotherapy research by pioneering the use of the latest technologies including artificial intelligence and FLASH radiotherapy. Prof Gary Royle, professor of Medical Radiation Physics within the Department of Medical Physics and Biomedical Engineering, leads the research for one of the centres joining this CRUK hub.

The network ‘RadNet’ is the charity’s largest ever investment in radiotherapy research and will accelerate the development of advanced radiotherapy techniques, challenging the boundaries of this mainstay treatment through world-first exploratory projects.

It will unite seven centres of excellence across the country: the Universities of Cambridge, Glasgow, Leeds, Manchester and Oxford, the Cancer Research UK City of London Centre (a partnership between University College London, Queen Mary University of London, Kings College London, the Francis Crick Institute, UCLH, Barts and GSTT) and the Institute of Cancer Research in partnership with the Royal Marsden Hospital, London.

Prof Gary Royle commented: “Radiotherapy is an extremely effective treatment for many cancers, but it fails to cure the disease when we are unable to deliver a sufficient radiation dose to the target. This can be due to relative radiation resistance of the cancer, tumour heterogeneity or clonal evolution, imprecise targeting of the tumour or a failure to achieve synergy with other anti-cancer treatments. Directly addressing these fundamental limitations has the potential to dramatically unlock the full potential of radiation-based cancer therapies.”

The Cancer Research UK City of London Centre has been awarded £14m, with research to include:

Michelle Mitchell, chief executive of Cancer Research UK, said: “Radiotherapy is a cornerstone of cancer medicine, with around 4 in 10 patients receiving it as part of their treatment. The launch of our network marks a new era of radiotherapy research in the UK. Scientists will combine advances in our understanding of cancer biology with cutting-edge technology to make this treatment more precise and effective than ever before”.

Cancer Research UK supported some of the earliest research into the treatment of cancer with radiation and pioneered the first use of radiotherapy in the 1920s. In its simplest form, this treatment works by blasting tumours with x-ray radiation, killing cancer cells by irreversibly damaging their DNA. Today, over 130,000 patients are treated with radiotherapy on the NHS every year.

RadNet aims to improve cancer survival by optimising and personalising radiotherapy. The centres will spearhead the development of new techniques for delivering radiotherapy and investigate new radiotherapy-drug combinations, including immunotherapies. Scientists will also focus on reducing the long-term side effects associated with this treatment, improving patients’ quality of life during and after treatment.

The innovative research that RadNet will deliver includes:

Exploring FLASH radiotherapy, where high doses of radiation are delivered in short, rapid pulses of less than a second. Research so far suggests that FLASH has the potential to cause less damage to the healthy tissue surrounding the tumour than traditional radiotherapy, where tissues are exposed to lower doses of radiation over a longer period, often resulting in long-term side effects.

RadNet will be a beacon, attracting world leading researchers from across the globe and promoting collaboration between diverse scientific fields. £4million of the funding will be dedicated to joint research projects, conferences and secondments between locations. The network will also invest in training the next generation of radiotherapy researchers to ensure the UK’s radiotherapy research community continues to thrive.

Dr Adrian Crellin, Cancer Research UK Trustee and Vice-President of the Royal College of Radiologists, said: “I’ve seen first-hand how successful radiotherapy can be for patients that I treat, but it’s frustrating to see the UK lagging behind other countries like the US when it comes to new research. Cancer Research UK’s investment will overhaul radiotherapy research in the UK to bring the next generation of treatments to patients sooner.”