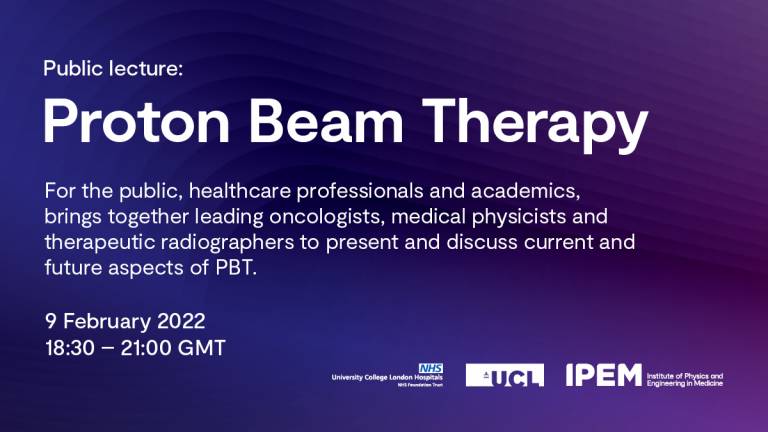 Unfortunately, due to rising cases of COVID-19 in London, this event has been postponed until we can hold it safely in-person. Please check back for announcements of a new date. For the public, healthcare professionals and academics alike, this event brings together leading oncologists, medical physicists and therapeutic radiographers to present and discuss current and future aspects of Proton Beam Therapy. 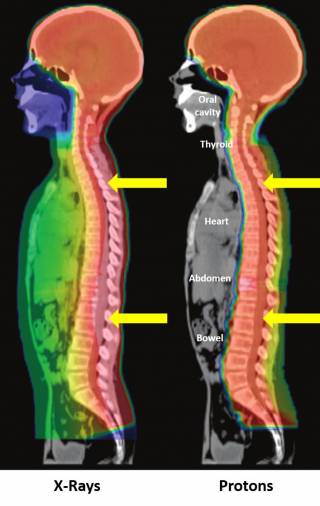 High energy Proton Beam Therapy (PBT) is a type of radiotherapy that uses a beam of high energy protons to treat specific types of cancer. Following ten years of provision under the Proton Overseas Programme, which provided treatment abroad to over 1100 patients with costs met by the NHS, PBT began in England in 2018, with the opening of the Proton Beam Therapy Centre at The Christie in Manchester. The second NHS centre will open at University College London Hospitals NHS Foundation Trust (UCLH) in late 2021.

This lecture, for the public, healthcare professionals and academics alike, brings together leading oncologists, medical physicists and therapeutic radiographers to present and discuss current and future aspects of PBT, including:

Importance of a ‘specialist paediatric’ approach 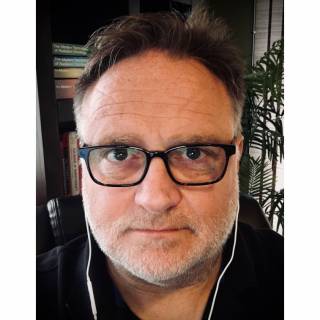 Richard trained as a clinical scientist (medical physics) in London with the National Health Service (NHS) before working as a clinical radiotherapy physicist in both the UK and Canada. He also spent a couple of years involved in ion-microbeam research at the Gray Laboratory Cancer Research Trust in the UK.

In 2002 Richard joined the faculty at Loma Linda University Medical Center in California, the world’s first hospital‐based proton therapy facility, before moving to The University of Texas MD Anderson Cancer Center in 2005 to help implement and develop a new proton therapy programme, including the first proton pencil beam scanning system in the United States. He returned to London in 2013 to take leadership roles in both the national NHS proton therapy service and proton therapy physics research. 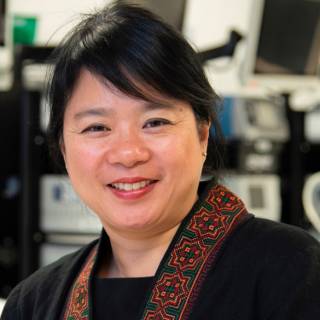 Dr Yen Ching Chang has been a consultant at UCLH since 2005. She has a specialist practice in paediatric radiotherapy (in particular neuro oncology and haematological malignancies) as well as in the late effects of childhood cancers and their treatment. She is an active member of the Children Cancer and Leukamia Group particularly in the Radiotherapy and Late Effects Groups. Dr Chang is the clinical lead for the Proton Beam Therapy service.

Dr Chang has a keen interest in medical education. She has been an educational supervisor for trainees in clinical oncology for more than 15 years. She is a former RCR College Tutor and North London Training Programme Director for Clinical Oncology. 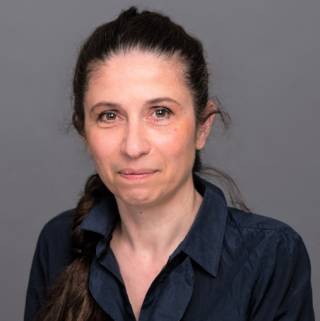 A clinician scientist in precision radiotherapy committed to improving outcome through research investigating effects in normal tissue and novel agents - novel radiation combinations. Professor of Radiotherapy at University College London. She is also the clinical director of CRUK City of London Radnet Radiation Research Unit and a practicing clinician at UCLH. 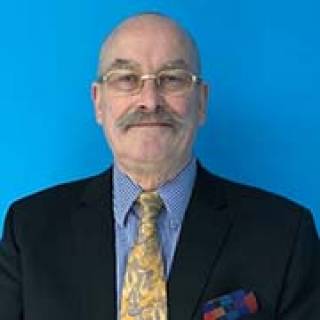 Immediate Past President, Institute of Physics and Engineering in Medicine (IPEM)

Professor Stephen O'Connor has an international reputation in the medical device industry as an expert in implantable devices and respiratory physiology. His work on implantable devices has benefited millions of patients worldwide. He has transformed the training and education of medical and technical professionals in the device industry. He advanced medical technology to improve diagnosis, therapy and most importantly patient outcomes. He has also contributed hugely to the work of professional bodies, particularly IPEM, serving as President from 2019-2021. Stephen was elected a Fellow of the Royal Academy of Engineering in 2021. 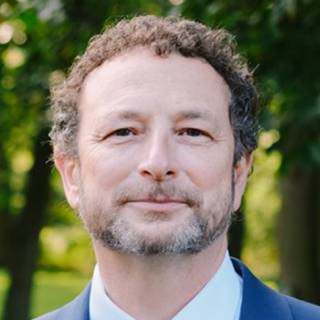 Andrew is Proton Physics Group Lead for the UCLH proton beam therapy service and has been in this post for the last 4 years. Previously he worked for many years in conventional radiotherapy and was involved in the early introduction of technologies such as Intensity Modulated Radiotherapy and Image Guided Radiotherapy. He holds an honorary academic position in UCL and has research interests in PBT clinical trial development and novel detectors for PBT measurement and quality assurance.