UCL Rocket – part of the UCL Racing team – is celebrating a second-place win in the 1km Combined Category at Mach-22. We sat down for a chat with them about how it happened. 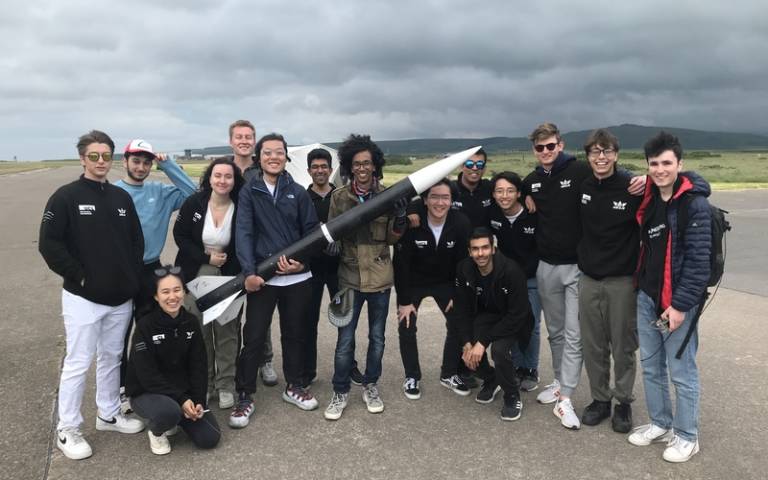 Held in Scotland last month, the Mach-22 Launch Competition challenged university teams from across the UK to design, build and launch a rocket and CanSat. It was the UCL Rocket team’s first time competing and – accordingly – they named their rocket ‘Tentatively Optimistic’.

A successor of ‘Banana Rocket’ – which the team launched at the National Rocketry Championship earlier this year, Tentatively Optimistic was the two-metre-long brainchild of a band of over 20 people, including supervisors Professor Tim Baker, Professor Yiannis Ventikos and Dr Tom Rushton, Rocket Lead Shirom Selvaraj and former Lead Alex Zhang. The rocket was made from scratch at MechSpace, with all the rocket components – including the fibreglass – built in-house.

“We were all so tense standing at the launch pad,” current Rocket Lead Shirom shares; “We had put in so much of our time and energy through the whole year to get here and it all came down to this one moment.”

UCL Rocket was the last team to launch and, with the winds and rain fast approaching the limits of what would be safe to fly in, the odds were not looking good. “In my head I was thinking about the hundreds of things that would have to go right for the launch to be successful,” Shirom remembers; “I held my breath as the countdown began and got ready to press the button… and for a second nothing happened.”

Then a small flame appeared, and – without warning – an epic roar erupted from the rocket as the motor ignited. The team were ecstatic; “It was just a few seconds, but experiencing the rocket we made fly and hearing the shouts and cheers of my teammates made the year of effort worth it,” says Shirom. “When we saw the rocket drifting down with a successful parachute deployment, we were elated! We started to sprint, running a kilometre across fields and fences just to meet it when it got down.”

The team placed second in the 1km Combined Category, with an apogee of 1km. Tentatively Optimistic had a mass of 12kg, with dual parachute deployment – one parachute deployment at apogee and one at 300 metre altitude. The rocket deployed a 1kg payload (CANSAT), with atmosphere readings at high altitudes.

On their win, Shirom said:

“It was one of the best moments in my life and as I watched my team laughing and shouting, I felt so much gratitude – for them, for our supervisors Professors Tim Baker and Yiannis Ventikos, for Tom Rushton with his constant support – both technical and emotional; for the sportsmanship and comradery of the other teams and for the competition staff. I was so impressed with how everyone came together and how far we went”

What are the team’s plans for next year? “We plan to fly higher,” Shirom answers, declaring the team’s plans to scale up, recruit more members and attend bigger competitions. The team has their eye on the Spaceport America Cup and aims to go 10km for their rocket next year.

Well – as they say, reach for the stars.