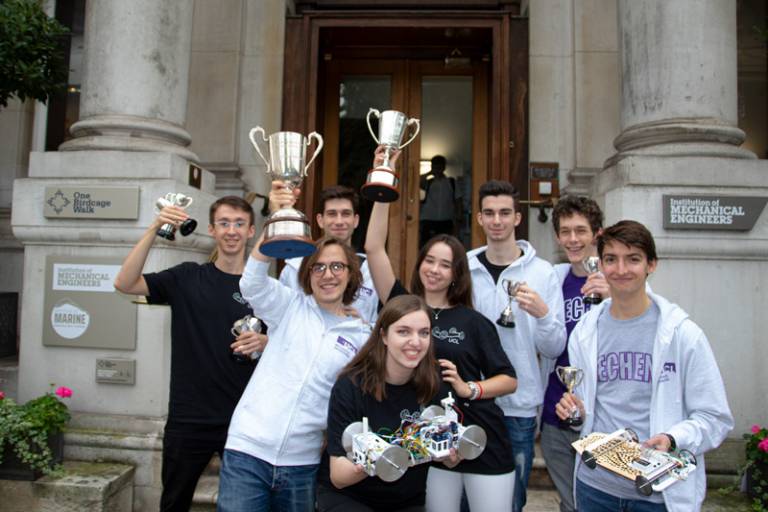 The competition, held at the IMechE’s headquarters in Westminster London, saw UCL’s first year team win Best Design and overall winners in their challenge, with remarkable “perfect 10” scores. The first-year team’s task was to design and build a small automated “repeatable” moveable device capable of travelling a range of specific distances without interference.

The UCL team’s design, essentially the first stages of a robotic vehicle, built to a strict £30 budget, performed excellently in competition, impressed judges and saw off prototype designs from fellow regional winners Lancaster and Bournemouth Universities by hitting each distance target almost perfectly.

The achievement of the first-year team (now starting their second year at UCL) is all the more remarkable as the members only met in person for the first time within the last few days, having collaborated exclusively online throughout the last challenging academic year, due to the pandemic. “We just met a week ago but it feels like years,” said Raphael Bouchet. Teammate George Stonor followed, “Literally the last week or two weeks we were able to meet in person and put the car together. Everything up until that point was virtual meetings on Teams or Zoom and sending CAD designs.”

There was a higher design technical specification but less pressure on the day for UCL’s second-year team, who, having won the Greater London Regional finals earlier in 2021, faced no direct competition on the day at the National Finals. Nevertheless, the senior team proved more than worthy winners, wowing judges and competitors alike by putting their sleek, laser-guided prototype through its paces, demonstrating a high level of precision over all the competition’s target distances.

Commenting on the undergraduates’ wins, UCL Mechanical Engineering’s Head of Department Professor Yiannis Ventikos said:
“It gives me immense pleasure to join my voice to that of everyone in our department, and in the whole of UCL as a matter of fact, and congratulate both the first year and the second year teams for winning the national IMechE competitions.

UCL Mechanical Engineering puts a lot of emphasis on exposing our students to the entire spectrum of the design cycle, from advanced and rigorous planning,  theory and computation, all the way to detailed and meticulous building and testing. These teams competed internally and beyond, with poise, ingenuity, determination and a lot of hard work to achieve these amazing results.”

The IMechE’s Design Challenge gives mechanical engineering undergraduates a taste of the ‘real world’ of engineering, challenging them to design, create, present and run a device to a strict technical specification.