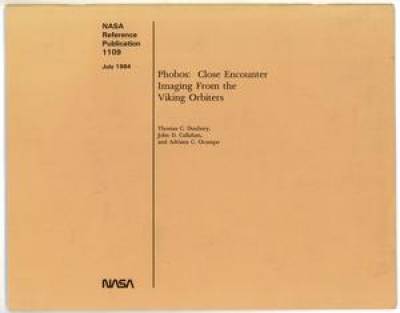 Don't judge a book by its cover

The Viking missions to Mars, two identical spacecraft launched a few weeks apart in 1975, are well known for making the first successful landings on the surface of the red planet. But the Viking orbiters were important too, mapping the surface of the planet and observing its moons, Phobos (fear) and Deimos (dread).

This NASA book from 1984, entitled Phobos: Close Encounter Imaging from the Viking Orbiters is a comprehensive album of the observations the programme made of Phobos, the larger of the two moons.

This picture shows a typical spread, produced during the flyby of Phobos on May 26, 1977 by Voyager Orbiter 1. Although it is the larger of the two moons of Mars, Phobos is still very small, and seems likely to be an asteroid captured by Mars’ gravity, rather than a moon formed at the same time as its parent planet.

A fraction of the size of Earth’s Moon, its gravity is not strong enough to have pulled it into a sphere, leaving the irregularly-shaped object visible here.

A Russian mission to land on Phobos and return a sample to Earth, Fobos-Grunt, malfunctioned shortly after launch in November 2011 and never left Earth orbit.