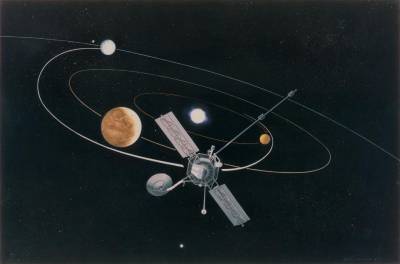 Despite its proximity to Earth (along with Venus, it lies within Earth's orbit), Mercury is hard to reach, and has not been studied particularly intensely. To date, only two probes have visited the planet (both American), only one of those entered orbit, and none has landed on the surface.

Travelling to Mercury requires a relatively high speed, and orbits of the planet (thanks to the Sun being so near) are fairly unstable.

Mariner 10, the first visitor to Mercury, lifted off in 1973, making three fly-bys over the next year and a half. Thanks to Mercury's difficult orbit, the spacecraft had to make a gravitational slingshot by Mercury to fling the craft into the correct orbit, then used solar radiation pressure on its large solar panels and antenna (visible in the artist's impression above) to control its orientation.

These complex orbital mechanics were designed by Italian scientist Bepi Colombo, after whom a forthcoming European/Japanese mission to the planet will be named.

On its way to Mercury, Mariner 10 also observed Venus, discovering evidence of rotating cloud systems and a weak magnetic field. During its three approaches of Mercury, the probe made extensive photography of the surface, finding a planet very similar in appearance to the Earth's Moon, as seen in this photo from the JPL Photojournal. 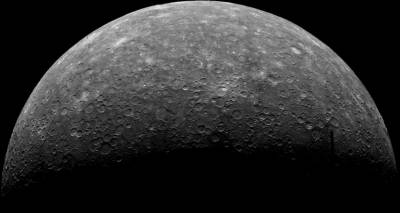