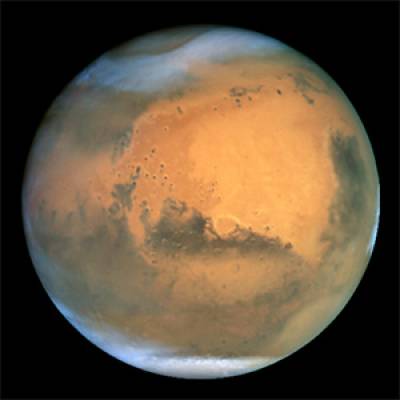 Mars seen by the Hubble Space Telescope in 2001, as the planet was at its closest approach to Earth. Even through the best telescope on Earth, only broad outlines of the surface features can be seen. The Oxia Palus region is just above and to the left of the centre of the planet, where a number of dark dots (actually large craters) can be seen.
Credit: NASA, ESA and the Hubble Heritage Team (STScI/AURA)

We joke today about Victorian astronomers seeing 'canals' on Mars, and of HG Wells' fanciful vision of Martian invaders landing in Surrey. But it is easy to forget just how little scientists knew about the surface of Mars, as recently as the 1960s.

Olympus Mons, the vast extinct volcano the size of Germany which is the Solar System's tallest mountain, appeared as a snowy dot, its nature as a mountain suspected but not proven. Vallis Marineris, the canyon system that dwarfs the Grand Canyon, was totally unknown, and is named after Mariner 9.

Even through the best telescopes available today, relatively little detail appears on the surface of Mars. It is just too small and too far away.

This changed dramatically in the 1960s and 1970s when a fleet of Soviet and American probes travelled to Mars for the first time.

Mariner 9, a NASA probe in 1971-2, was the first to orbit the red planet, rather than fly-by, and produced what were, for the time, remarkably detailed maps of the planet. 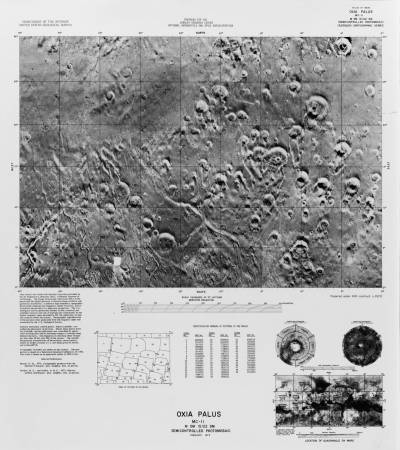 This image of the Oxia Palus Quadrangle, taken by Mariner 9, shows a large area of the planet's surface. The horizontal extent of the map is a full eighth of the planet's circumference, while the vertical axis runs from the equator (the bottom edge of the map) one third of the way towards the planet's North Pole.

The Oxia Palus Quadrangle is one of 30 regions that NASA split Mars into for the purpose of mapping. The rectangle and two circles below and to the right of the main image, marked 'location of quadrangle on Mars', show the outlines of these zones on a map of the entire planet.

Among the other metadata below the main image is an index of the observation IDs of the pictures that make up the mosaic, and a chart showing how the image was stitched together. The edges of these pictures are faintly visible if you look closely at the main image.

Mars Pathfinder, a 1997 probe which landed on Mars, touched down in the Oxia Palus region, in the third row of the third column of this map. 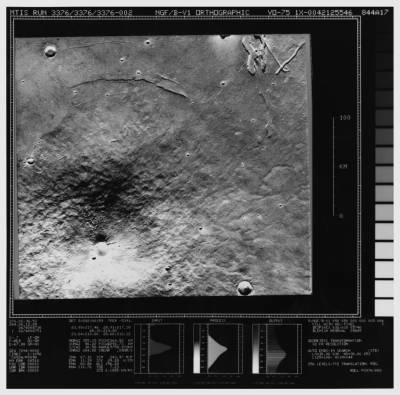 Following the Mariner program, which was entirely based on orbits and fly-bys, and the Soviet Mars 2 lander which failed while transmitting its first photo, NASA's attention turned to landing on the surface.

Viking 1 and 2, both of which landed in 1976, returned the first useable data from the planet's surface, as well as providing further mapping from their respective orbiters.

The image above shows Ascraeus Mons, an extinct volcano more than twice as high as Mount Everest, which had been discovered by Mariner 9 a few years earlier.

Though this image looks superficially quite similar to the Mariner 9 image, it is far more detailed. The image shows a region roughly the size of a single square near the equator in Mariner 9's image. (Because it was produced using a Mercator projection, the squares in Mariner 9's map cover a smaller area, the further they are from the equator.)

After the Viking 1 lander switched off for the last time in August 1980 (Viking 2 failed a few months earlier), the surface of Mars lay untouched for 17 years.

Mars Pathfinder, launched in December 1996 and touching down seven months later, marked a return to Mars. Since then, the Phoenix Lander, and three rovers: Spirit, Opportunity and Curiosity, have followed. Two further landers, Mars Polar Lander and the British probe Beagle 2 crash landed.