A UCL-led team has created the highest resolution image yet of the Sun’s full disc and outer atmosphere, whose eruptions can cause hazardous space weather around Earth. 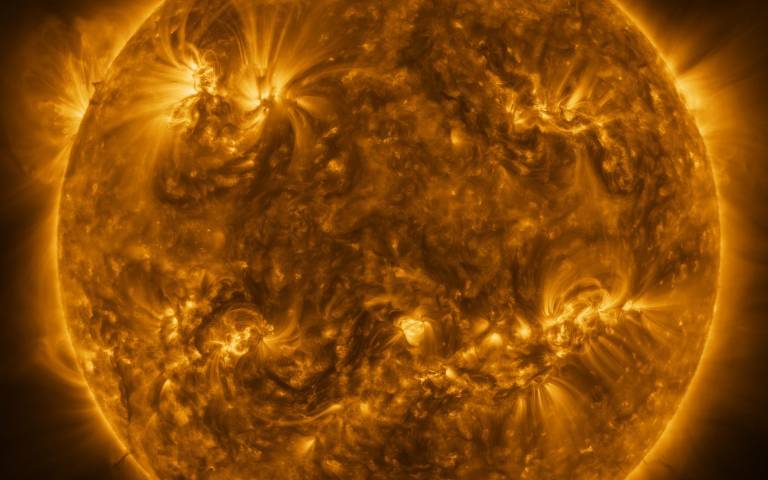 The image was created using data from the European Space Agency’s Solar Orbiter. It is a mosaic of 25 individual images taken by the spacecraft’s Extreme Ultraviolet Imager (EUI) on March 7, when the satellite was crossing directly between the Earth and the Sun.

The images were taken one after another over four hours at a distance of roughly 75 million kilometres from the Sun – about halfway between our world and its parent star.

The EUI is one of two suites of instruments onboard Solar Orbiter whose science teams are led by UCL researchers. The other UCL-led instrument is the Solar Wind Analyser (SWA).

Dr David Long (UCL Mullard Space Science Laboratory), Co-Principal Investigator on the EUI, said: “It’s a very exciting image, showing in unprecedented detail what’s happening in the low solar atmosphere. This is the bit in between the outer corona and the inner region of the Sun, the photosphere.

“This is where cooler plasma held in place by magnetic fields can become unstable and erupt. By studying this region, we can work out what drives these eruptions, helping us to predict space weather better.

“The Sun’s photosphere is more stable, while if we look at the outer corona we see eruptions that have already started. The low solar atmosphere, on the other hand, is where the really interesting physics is happening, and it’s a region that we can only see from space, not with telescopes on Earth.”

The EUI images the Sun at a wavelength of 17 nanometres (17 billionths of a metre), in the extreme ultraviolet region of the electromagnetic spectrum. This reveals the Sun’s whole upper atmosphere, the corona, which has a temperature of around a million degrees Celsius.

At the 2 o’clock (near the image of the Earth for scale) and 8 o’clock positions on the edges of the Sun, dark filaments can be seen projecting away from the surface. These “prominences” are prone to erupt, throwing huge quantities of coronal gas into space and creating “space weather” storms.

In total, the final image contains more than 83 million pixels in a 9,148 x 9,112 pixel grid. For comparison, this image has a resolution that is ten times better than what a 4K TV screen can display.

The EUI images were taken on 7 March, when Solar Orbiter crossed the Sun-Earth line, so the images can be compared with Earth-bound solar instruments and cross-calibrated. This will make it easier to compare results from different instruments and observatories in future.

Another image taken on the same day by a separate instrument, the Spectral Imaging of the Coronal Environment (SPICE), represents the first ever full Sun image taken at the Lyman-beta wavelength of ultraviolet light that is emitted by hydrogen gas.

It is also recording data on the solar wind of particles that flows outwards from the Sun – including with the UCL-led Solar Wind Analyser (SWA), whose Principal Investigator is Professor Christopher Owen (UCL Mullard Space Science Laboratory).

This month, the EUI and SWA teams have been working together to connect what is happening in the low solar atmosphere with the material flowing around the spacecraft itself. “This is a key aim of the Solar Orbiter mission and this is the first campaign to actively try to do that,” said Dr Long.