‘Eyes’ of Mars rover get test run on Earth

The capabilities of a UCL-led panoramic camera system that will guide the search for life on Mars atop the European Space Agency’s Rosalind Franklin rover are being tested ahead of the rover’s launch next year. 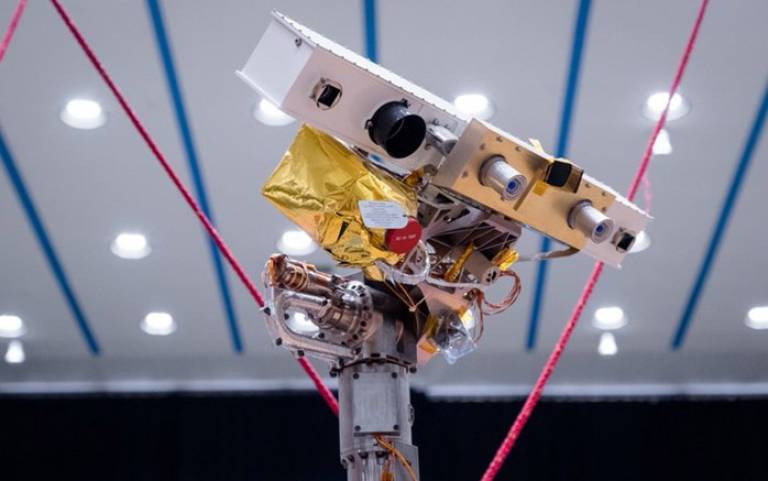 A replica of the rover and the Panoramic Camera suite known as PanCam are being used to test the wide range of photo settings – from panoramas to close-ups, from 3D maps to wheel selfies – that will deliver the greatest science possible during the ExoMars mission on the Red Planet.

The tests have been carried out using the Ground Test Model rover at the Mars Terrain Simulator at the ALTEC premises in Turin, Italy.

“The views from PanCam will give us key insights on the martian landscape.”

Science on top
Engineers have packed as much science as they could into the camera system.

The two wide-angle cameras (WACs) are set 50 cm apart and form a stereo pair that images what is in front of the rover from a vantage point about two metres above the ground. Scientists create 3D pictures and depth maps by overlaying simultaneous snapshots.

“Besides plotting routes where the rover can go, these cameras help us do geology and atmospheric science,” says Professor Coates.

The High Resolution Camera (HRC) has eight times the resolution of the wide-angle cameras to closely examine rock texture and grain size in colour.

This powerful camera “will help us investigate very fine details in outcrops, rocks and soils, find the most promising spots to drill, and take images of the samples before they are sent to the rover’s laboratory,” says Nicole Schmitz, PanCam co-principal investigator responsible for the high-resolution camera at the DLR Institute of Planetary Research, Germany.

Mounted below is the infrared spectrometer (ISEM) that analyses the geochemistry of the rocks. HRC and ISEM are a well-matched couple. They are co-aligned, so that scientists can see in the HRC images where ISEM took its measurements.

Rainbow eyes
Humans and smartphones can only see colours in visible light. PanCam can ‘see’ in 19 colours, in the visible and near infrared wavelengths. Each of the wide-angle cameras has a filter wheel with 11 positions to look at the colours of the rocks and the martian sky.

This special carousel will allow the rover to stare at the Sun, find the amount of dust in the atmosphere and measure the water vapour content during sunsets on Mars.

A calibration target mounted on the rover’s solar array top deck, comprising a palette of stained glass similar to that of church windows, will help PanCam get its colours right.

Mars-proof
PanCam can withstand much harsher conditions than smartphone cameras on Earth. The hardware can cope with extreme temperatures, from zero degrees during the day down to –120 degrees Celsius during the cold martian nights. The sensors are also resistant to the high radiation environment during the journey to Mars and on the surface of the planet.

“It was challenging to build a robust enough camera with adjustable focus to take high resolution images of very close and far away targets,” says Schmitz.

Rosalind Franklin can also take a look at herself – a small spherical mirror close to one of the rover’s wheels can be used to get a view underneath the rover. The Rover Inspection Mirror, mounted near a rover wheel, will enable PanCam to capture images from underneath the rover.

There is yet another camera which will come in to play for martian shots in upcoming tests. The Close-Up Imager, CLUPI, will provide detailed views of the soil that is churned out by the drilling action. When the drill is in ‘stowed’ position this camera can also take photos of the landscape to the side of the rover. 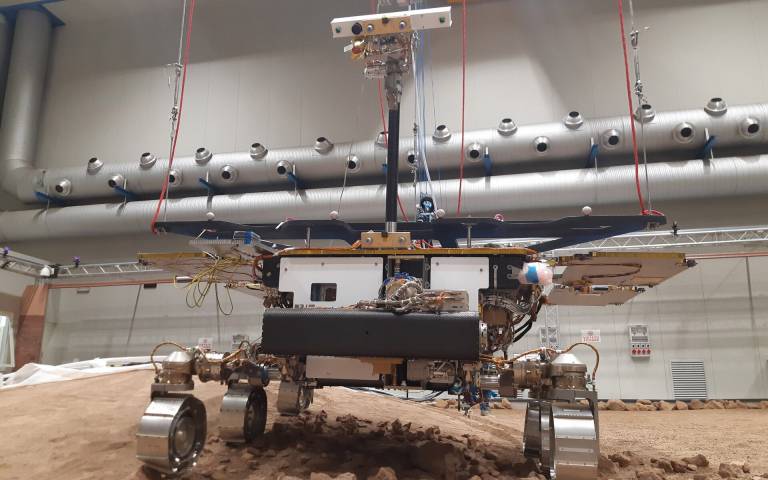