An international team involving UCL researchers has developed a computer model of the powerful jets released by the M87 black hole, matching the observations of astronomers and providing new support for the theory of general relativity. 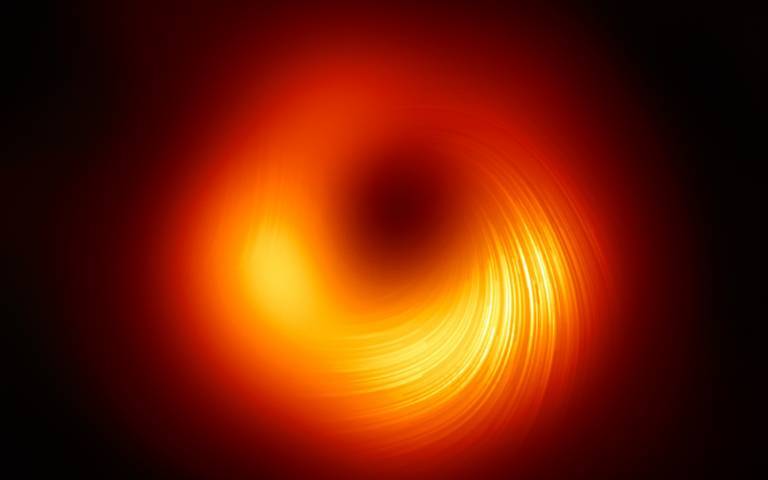 This supermassive black hole, located in the Messier 87 (M87) galaxy 55 million light years away from Earth, has a mass equivalent to six and a half billion suns. It is the first black hole for which an image exists, created in 2019 by the international research collaboration that is the Event Horizon Telescope, involving Dr Ziri Younsi (UCL Mullard Space Science Laboratory).

The black hole launches a jet of plasma at very close to the speed of light, a so-called relativistic jet, over a distance of more than 6,000 light years (that is, the jet extends beyond the giant galaxy in which the black hole resides). The tremendous energy needed to power this jet likely originates from the gravitational pull of the black hole, but how a jet like this manifests and what keeps it stable across this enormous distance is not yet fully understood.

The black hole attracts matter that rotates in a disc in ever smaller orbits until it is swallowed by the black hole, like water going down a plug hole. The jet is launched from the centre of this disc of matter (the accretion disc), and scientists including UCL’s Dr Younsi have now modelled this region in great detail in a new paper published in Nature Astronomy.

Dr Younsi said: “The black-hole images we calculated in this study are in close agreement with the actual multi-wavelength astronomical observations of M87, providing further evidence that black holes described by Einstein’s theory of general relativity provide the most natural explanation for what we observe in M87. The results of our study have also significantly narrowed-down the space of alternative candidates to supermassive black holes”. 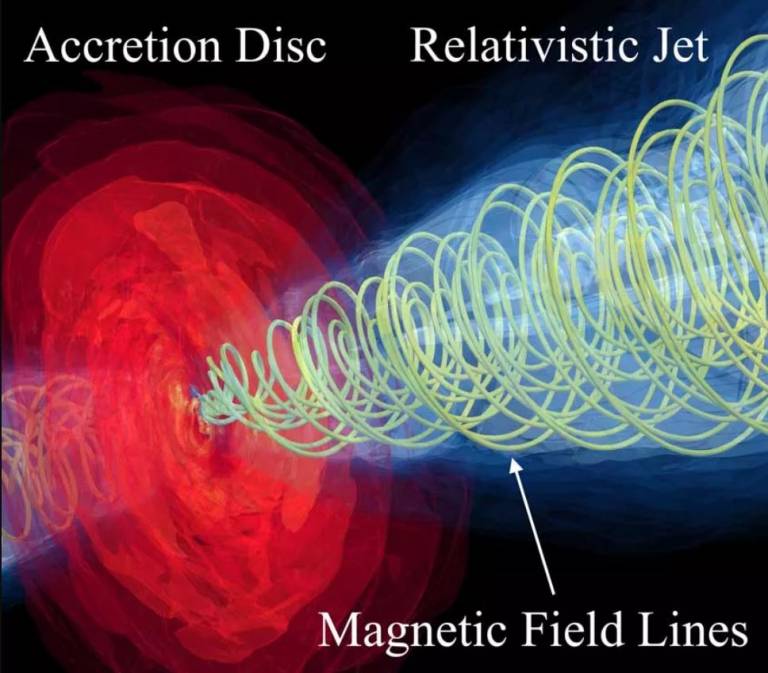 The team – from Europe, the US and China – used highly sophisticated three-dimensional supercomputer simulations that use the staggering amount of a million CPU (central processing unit) hours per simulation and had to simultaneously solve the equations of general relativity by Albert Einstein, the equations of electromagnetism by James Maxwell, and the equations of fluid dynamics by Leonhard Euler.

The result was a model in which the values calculated for the temperatures, the matter densities and the magnetic fields correspond remarkably well with what was deduced from the astronomical observations.

On this basis, the team were able to calculate the complex motion of photons in the curved spacetime of the innermost regions of the jet and the black hole’s event horizon, translating this into images. They were then able to compare these computer-modelled images with observations made using numerous ground- and space-based telescopes over the past three decades.

Dr Alejandro Cruz-Osorio, lead author of the study, commented: “Our theoretical model of the electromagnetic emission and of the jet morphology of M87 matches surprisingly well with the observations in the radio, optical and infrared spectra. This tells us that the supermassive black hole is probably highly rotating and that the plasma is strongly magnetised in the jet, accelerating particles out to scales of thousands of light years.”