A theory as to why the Sun’s outer atmosphere differs in its chemical make-up from its inner layers has been confirmed by direct observation for the first time by scientists at UCL and the Italian Space Agency. 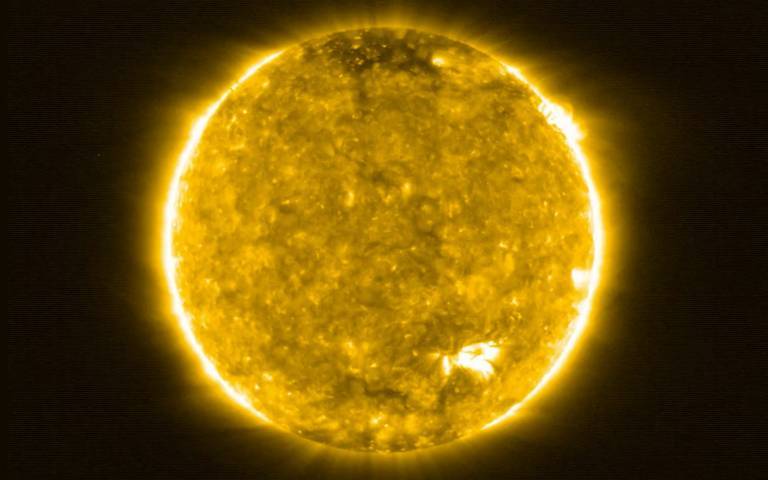 The Sun’s extremely hot outer layer, the corona, has a very different chemical composition from the cooler inner layers, but the reason for this has puzzled scientists for decades.

One explanation is that, in the middle layer (the chromosphere), magnetic waves exert a force that separates the Sun’s plasma into different components, so that only the ion particles are transported into the corona, while leaving neutral particles behind (thus leading to a build-up of elements such as iron, silicon and magnesium in the outer atmosphere).

Now, in a new study published in The Astrophysical Journal, researchers combined observations from a telescope in New Mexico, the United States, with satellites located near Earth to identify a link between magnetic waves in the chromosphere and areas of abundant ionised particles in the hot outer atmosphere.

Lead author Dr Deborah Baker (UCL Space & Climate Physics) said: “The different chemical compositions of the Sun’s inner and outer layers were first noted more than 50 years ago. This discovery generated what is one of the long-standing open questions in astrophysics.

“The difference in composition is surprising, given that the layers are physically linked, and that matter in the corona originates in the innermost layer, the photosphere.

“Now, thanks to a unique combination of ground-based and space-based observations of the solar atmosphere, carried out nearly simultaneously, it has been possible to definitively detect magnetic waves in the chromosphere and link these to an abundance of elements in the corona that are not found in the inner regions of the Sun.

“Identifying the processes that shape the corona is crucial as we attempt to better understand the solar wind, a stream of charged particles flowing outward from the Sun, which can disrupt and damage satellites and infrastructure on Earth.

“Our new findings will help us to analyse the solar wind and trace it back to where it is coming from in the Sun’s atmosphere.”

The findings build on those of a related paper by many of the same authors, published last month in the Philosophical Transactions of the Royal Society, which unambiguously detected magnetic waves in the chromosphere, ruling out other factors that could have generated similar magnetic oscillations.

The existence of magnetic waves - vibrations of ions travelling in a certain direction – were first theorised in 1942 and are thought to be generated by the millions of nanoflares, or mini explosions, taking place in the corona each second.

The research team behind the new paper traced the direction of the waves by modelling a range of magnetic fields and found that waves reflecting in the chromosphere seemed to be magnetically linked to areas of abundant ionised particles in the corona.

Dr Marco Stangalini (Italian Space Agency and the National Institute of Astrophysics, Rome), a co-author of both papers, said: “The difference in chemical composition between the inner layer, the photosphere, and the corona is a feature not just of our own Sun, but of stars throughout the Universe. Thus, by observing our local laboratory, the Sun, we can improve understanding of the Universe far beyond it.”

The two papers used observations acquired by IBIS, the high resolution spectropolarimetric imager at the Dunn Solar Telescope in New Mexico, together with imaging from the EUV imaging spectrometer (EIS) on the Japan/UK/USA Hinode solar observatory (an instrument designed and built by a UCL-led team) and data from the NASA Solar Dynamics Observatory (SDO).

The researchers say their findings provide a foundation for future research using data from the Solar Orbiter, a European Space Agency-mission acquiring close-up images of the Sun. The mission, which launched last February, includes instruments proposed, designed and built at UCL.

The research team for the new paper included scientists from the University of Oslo, Queen’s University Belfast, and George Mason University, as well as UCL and the Italian Space Agency.

The work was funded by the UKRI’s Science and Technology Facilities Council, the EU’s Horizon 2020 programme, NASA’s Hinode programme, Invest NI and Randox Laboratories Ltd, and the Research Council of Norway through its Centres of Excellence scheme.