An international team involving researchers at UCL has discovered a new planet, GJ 367 b, whose surface temperature may reach 1,500 degrees Centigrade – hot enough to melt all rock and metal – and which takes only eight hours to orbit its star. 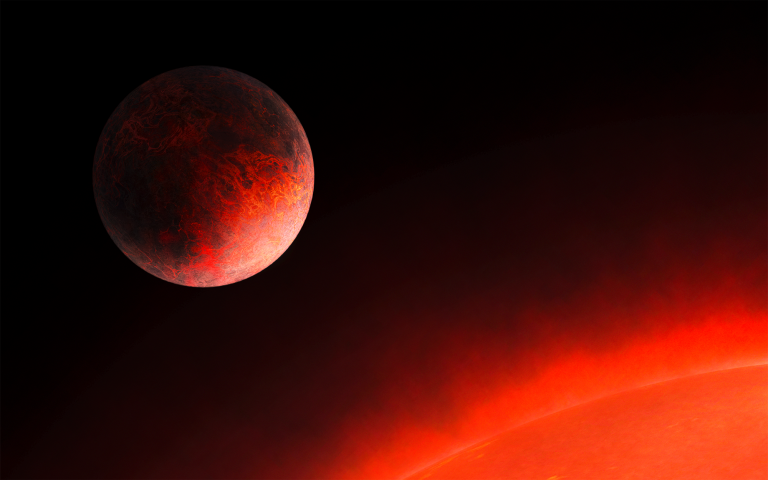 In a new study, published in the Science journal, the researchers show that the planet, which is 31 light years from Earth, is one of the lightest among the nearly 5,000 exoplanets (planets outside our own solar system) that are known today, with half the mass of Earth. It has a diameter of just over 9,000 kilometres - slightly larger than Mars.

The team say the research represents a step forward in the search for a “second Earth” as it shows astronomers can determine the properties of even very small planets.

Co-author Dr Vincent Van Eylen (UCL Mullard Space Science Laboratory) said: “In this new study, the size and mass of the planet were calculated using two methods, both of which involved analysing the light of the planet’s star. One was to measure the minute dip in emitted light from the star as the planet passed in front of it. This was done using data from NASA’s Transiting Exoplanet Survey Satellite (TESS).

“The other method was to infer the mass of the planet from the effect it had on the movement of the star. This motion was slight – at a rate of 80cm a second, it was no more than walking speed – so it’s fantastic that we were able to detect this tiny motion from 31 light years away.”

The study involved 78 researchers and was led by astronomers at the Institute of Planetary Research at the German Aerospace Center (Deutsches Zentrum für Luft- und Raumfahrt; DLR).

Lead author Dr Kristine Lam, from the DLR, said: “From the precise determination of its radius and mass, GJ 367b is classified as a rocky planet. This places it among the sub-Earth sized terrestrial planets and brings research one step forward in the search for a ‘second Earth’.”

GJ 367 b belongs to the “ultra-short period” (USP) group of exoplanets that orbit their star in less than 24 hours. “We already know a few of these, but their origins are currently unknown,” said Dr Lam. “By measuring the precise fundamental properties of the USP planet, we can get a glimpse of the system’s formation and evolution history.”

Following the discovery of this planet using TESS and the transit method, the spectrum of its star was then studied from the ground using the HARPS instrument on the European Southern Observatory’s 3.6m telescope.

By determining its radius and mass with an accuracy of 7 and 14 percent respectively, the researchers were also able to draw conclusions about the exoplanet’s inner structure. It is a low-mass rocky planet, but has a higher density than the Earth. “The high density indicates the planet is dominated by an iron core,” said Dr Szilárd Csizmadia.

“These properties are similar to those of Mercury, with its disproportionately large iron and nickel core that differentiates it from other terrestrial bodies in the Solar System.”

However, the planet’s proximity to its star means it is exposed to an extreme high level of radiation, more than 500 times stronger than what the Earth experiences. The surface temperature could reach up to 1500 degrees Celsius – a temperature at which all rocks and metals would be melted.

The parent star of this newly discovered exoplanet, a red dwarf called GJ 367, is only about half the size of the Sun. This was beneficial for its discovery as the transit signal of the orbiting planet is particularly significant. Red dwarfs are not only smaller, but also cooler than the Sun. This makes their associated planets easier to find and characterise. They are among the most common stellar objects in our cosmic neighbourhood and are therefore suitable targets for exoplanet research.

Researchers estimate that these red dwarfs, also known as ‘class M stars’, are orbited by an average of two to three planets, each of which is at most four times the size of Earth.