X-rays from Uranus detected for the first time

An international team of astronomers led by planetary scientists at UCL have detected X-rays from Uranus for the first time, which could help improve understanding of this enigmatic ice planet. 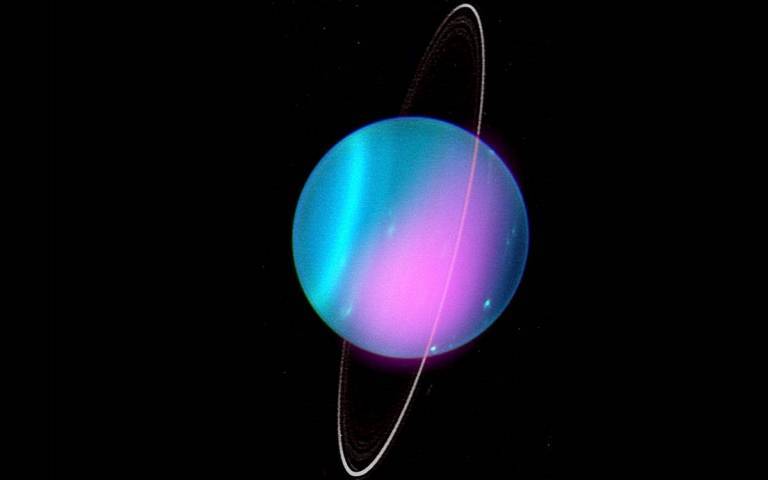 Most planets in our solar system emit X-rays and, although no X-rays had yet been detected from the two ice giant planets Neptune and Uranus, astronomers suspected Uranus would reflect X-rays from the Sun in the same way that Saturn and Jupiter do.

In the new study, published in the Journal of Geophysical Research, researchers analysed observations of Uranus from NASA’s Chandra X-ray Observatory taken in 2002 and 2017, finding a prominent detection of X-rays in 2002 and a possible one in 2017.

The team found that the planet was emitting more X-rays than if it were merely reflecting X-ray light from the Sun. These excess X-rays could be emitted by Uranus’s rings – produced when energetic particles collide with the ring material, making them glow and release X-rays – or alternatively from Uranus’s aurorae, where charged particles interact with the planet’s atmosphere, setting off bursts of light (the same process as causes the Northern Lights on Earth).

Co-author and PhD student Affelia Wibisono (UCL Mullard Space Science Laboratory) said: “There is some evidence suggesting the X-rays may have come from the aurorae. The X-rays from 2017 seemed to come from the same region where we would expect Uranus’s aurorae to be. In addition, we observed an X-ray ‘flare’ coming from Uranus and we often see Jupiter and Earth’s X-ray aurora flare.

“Astronomers do not yet fully know how Uranus produces its aurorae and that is partly because of the planet’s uniquely orientated magnetic field, which is not aligned with the planet’s centre – the result of an Earth-sized object hitting Uranus billions of years ago, knocking it on its side.

“More observations of Uranus using X-ray telescopes are needed to uncover clues as to how Uranus produces X-rays which would also deepen our knowledge of how objects in our Solar System and beyond emit this radiation.”

Lead author Dr William Dunn (UCL Mullard Space Science Laboratory) said: “We know so little about the puzzling ice giant planets of Uranus and Neptune, neither of which have been explored with spacecraft since Voyager 2 in the late 1980s. With recent NASA/ESA orbiters like Cassini and Juno revolutionising our understanding of Saturn and Jupiter, sending a similar spacecraft to the ice giants could offer unparalleled insights into these oft-forgotten worlds – worlds that represent perhaps the most common type of planet in the Universe.”

X-rays have been observed coming from all four of the rocky planets as well as Jupiter, Saturn, Pluto, moons, comets, and asteroids. More exotic objects in space, such as black holes and neutron stars, also emit X-rays.

The research was supported by the Science and Technology Facilities Council (STFC) and the European Space Agency.