Cysteine synthesis was a key step in the origin of life

In an important step during the early evolution of life on Earth, the formation of the amino acid cysteine delivered vital catalysts, which enabled the earliest protein molecules to form in water, according to a new study by UCL researchers. 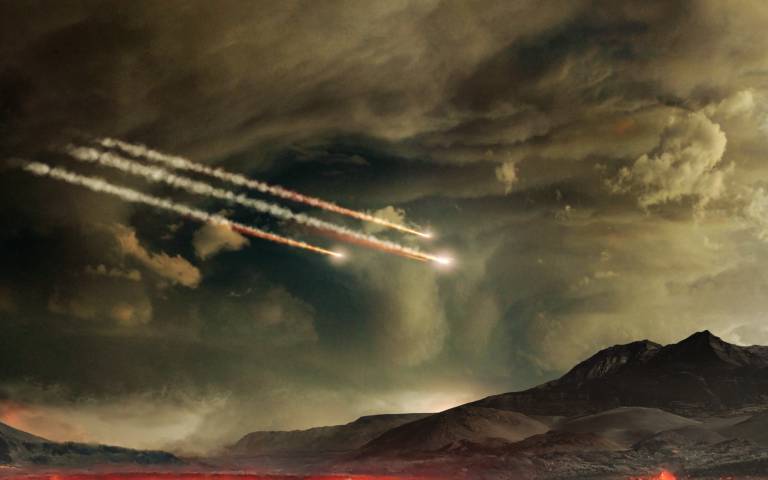 All proteins are built from the same 20 amino acids. One of these, cysteine, was assumed not to have been present at the origin of life. Despite its fundamental importance to all life today, it was unclear how cysteine might have formed on the early Earth.

In a new study, published in Science, UCL scientists have recreated how cysteine was formed at the origins of life. Additionally, they have observed how, once formed, cysteine catalyses the fusion of peptides in water – a fundamental step in the path towards protein enzymes.

The UCL researchers created cysteine using very simple chemistry and chemicals – hydrogen cyanide and hydrogen sulfide – that were likely to be abundant on the early Earth. The route that they have unravelled closely resembles how cysteine is synthesised in living organisms today, and the researchers believe they are historically linked.

The study also found that cysteine residues catalyse peptide synthesis in water by joining together short peptide fragments that the team had previously found in a study published in Nature* last year.

Senior author Professor Matthew Powner (UCL Chemistry) said: “Our results show how cysteine may have formed on the early Earth and how it could have played a critical role in the evolution of protein synthesis.

“Once formed, cysteine catalysts behave as ‘proto-enzymes’ to produce peptides in water. This robust chemistry could have generated peptides long enough to fold into enzyme-like structures, which would be the precursors to the protein enzymes that are fundamental to all living organisms.”

Co-lead author and Research Fellow Dr Saidul Islam (UCL Chemistry) said: “We have shown that nitriles possess the in-built energy required to form peptide bonds in water. This is the simplest way of making peptides that works with all of the 20 amino acids, which makes it all the more incredible.

“It is precisely the sort of simple, yet special, chemistry that was essential to kick-start life several billion years ago. Our study provides further evidence that the molecules of life descended from nitrile chemistry on the early Earth.”

Co-lead author Dr Callum Foden, who completed the work while a PhD student at UCL, said: “The peptide synthesis we discovered is simple, highly selective and uses molecules that were available on the early Earth.

“A single cysteine residue is enough to produce robust catalytic activity. It is remarkable that such small molecules can carry out such an important (bio)chemical reaction, selectively in water, at neutral pH, and in such high yields.”

Discussing further implications of their study, Professor Powner said: “We have resolved a long-standing problem for the origin of life by providing a simple solution to catalytic peptide synthesis in water. Importantly, the catalysts are built only from biology’s amino acids. Understanding how cysteine could have controlled the formation of Earth’s earliest peptides has made the long path from chemistry to a living organism seem a little shorter, and a little less daunting.

“Our study suggests cysteine was first introduced into life’s peptides by modification of serine (another of life’s amino acids). This now raises important questions about the early evolution and coding of peptide synthesis. Cysteine is widely assumed not to have been present in life’s first genetic code, and this fits neatly with our observations. Our results indicate that encoded serine could furnish cysteine peptides, leading to a key role for cysteine in evolution even before it was assigned to life’s genetic code.”

The study received funding from the Simons Foundation, EPSRC, and the Volkswagen Foundation.