Professor Richard Catlow, Dr Anna Regoutz and Professor Angelos Michaelides have all received awards from the Royal Society of Chemistry for their research and contributions. 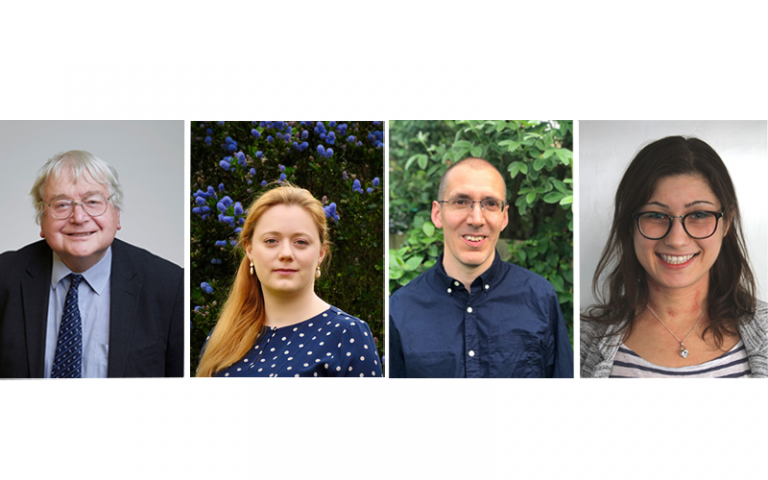 Professor Richard Catlow (UCL Chemistry and Cardiff University), was awarded the Royal Society of Chemistry’s Faraday Lectureship Prize for his work on the development and application of computational methods in conjunction with experiment as powerful and predictive tools in the physical chemistry of solids.

Professor Catlow said: “I am naturally delighted and honoured to receive this award, especially when I look at the list of previous awardees. I also feel that as well as honouring myself, it is recognition of the field in which I have worked and of the large number of scientists with whom I have collaborated, including the many dedicated students and post-docs whose work it has been my privilege to supervise.”

Dr Anna Regoutz (UCL Chemistry) has been named as the winner of the Joseph Black Award for her contributions to the development and application of X-ray photoelectron spectroscopy, an important analytical technique that can be used to study solids, liquids and gases and their chemistry and electronic structure. Dr Regoutz’s research team are developing and applying spectroscopic techniques to further an understanding of electronic materials and devices crucial for many aspects of daily life.

After receiving the award, Dr Regoutz said: “I am deeply humbled to receive the 2020 Joseph Black Award - it is a reflection of the hard work that my group puts in on a daily basis. It also makes me extremely grateful for the mentorship and support I have received over the years.”

Professor Angelos Michaelides (UCL Physics & Astronomy) received recognition for his research on complex aqueous interfaces and the formation of ice at such interfaces, receiving the Surfaces and Interfaces Award. His work involves the use of high-performance supercomputers to better understand important problems at the interface between chemistry and physics.

Professor Michaelides said: “I am honoured to have won the Royal Society of Chemistry’s Surfaces and Interfaces Award. There can be no doubt that this award acknowledges the hard work and dedication of the many excellent students, post-docs and collaborators our research team has had over the last few years.”

Final year PhD student Hayley Simon (UCL Institute of Archaeology) was also named as an award winner, and has been recognised for her innovative research on the conservation of Mary Rose iron cannonballs, receiving the Ronald Belcher Award. Her research project examines the impact of preservation treatments on archaeological iron corrosion, achieved through analysis of a set of over 1,200 cast iron cannonballs from the shipwreck of King Henry VIII's flagship, the Mary Rose, which sunk off the coast of Portsmouth on 19th July 1545.

Ms Simon said: “I am very honoured to receive the 2020 Ronald Belcher prize; however, I feel that most of the credit for the project should go to the cannonballs – they did all the work!”

Dr Helen Pain, acting chief executive of the Royal Society of Chemistry said: “We live in an era of tremendous global challenges, with the need for science recognised now more so than ever – so it is important to recognise those behind the scenes who are making significant contributions towards improving the world we live in. It is our honour and privilege to do that with these awards, which recognise exceptional scientific achievement.

“The global chemical sciences community is one that covers many different specialisms, from health and climate change to product development, sustainable transport, and everything in between. In recognising the work of [these award winners], we are also recognising the important contribution this incredible network of scientists makes to improving our lives every day.”

The Royal Society of Chemistry’s Prizes and Awards are given in recognition of originality and impact of research, or for each winner’s contribution to the chemical sciences industry or education. They also acknowledge the importance of teamwork across the chemical sciences, as well as the abilities of individuals to develop successful collaborations.

Of those to have won a Royal Society of Chemistry Award, an illustrious list of 50 have gone on to win Nobel Prizes for their pioneering work, including 2016 Nobel laureates Jean-Pierre Sauvage, Fraser Stoddart and Ben Feringa.