ESA’s Sun-exploring mission Solar Orbiter, which carries instruments proposed, designed and built at UCL, has made its first close approach to the Sun on June 15, getting as close as 77 million km to the star’s surface, about half the distance between the Sun and Earth. 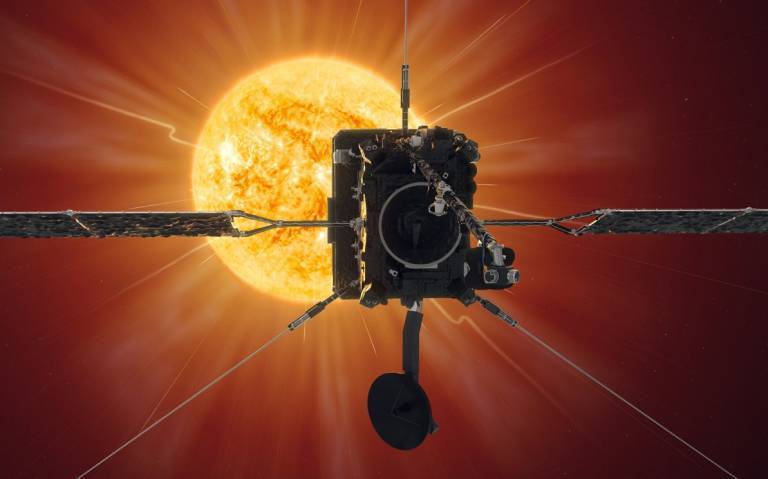 In the week following this first perihelion, the point in the orbit closest to the Sun, the mission scientists will test the spacecraft’s ten science instruments to prove that Solar Orbiter’s telescopes are ready for future scientific observations.

The suite of instruments includes the six telescopes, which will acquire close-up images of the Sun in unison for the first time. Set to be released in mid-July, they will be the closest images of the Sun ever captured.

The aim is to put together the images from all of Solar Orbiter’s telescopes to see how they take complementary data of the various parts of the Sun including the surface, the outer atmosphere, or corona, and the wider heliosphere around it.

UCL is a Co-Principal Investigator for the Extreme Ultraviolet Imager (EUI) – a suite of telescopes that will provide images of the hot and cold layers of the Sun’s atmosphere and corona, showing the dynamics in fine detail and providing the link between the Sun’s surface and outer corona.

Dr David Long (UCL Mullard Space Science Laboratory), Co-Principal Investigator on the ESA Solar Orbiter Mission EUI Investigation, said: “It’s incredibly exciting that we are getting high resolution pictures of the Sun from closer than ever before, which will give us a new insight into the relationship between the different layers of the solar atmosphere. The Sun is also starting to become more active, so I can’t wait for the start of the science phase of the mission in November 2021!”

Higher-resolution close-ups have been taken before, but from Earth where the atmosphere between the telescope and the Sun limits the solar spectrum that can been seen from space.

The ultraviolet  imaging telescopes on Solar Orbiter have the same spatial resolution as those of NASA’s Solar Dynamic Observatory (SDO), which takes high-resolution images of the Sun from an orbit close to the Earth. As Solar Orbiter is currently at half the distance to the Sun, its images will have twice SDO’s resolution during this perihelion.

The scientists will also analyse data from the four in-situ instruments that measure the properties of the environment around the spacecraft, such as the magnetic field and the particles making up the solar wind.

Professor Chris Owen (UCL Mullard Space Science Laboratory), Principal Investigator on the ESA Solar Orbiter Mission SWA instrument, said: “It's a relief to be moving out of the (now not so) Near-Earth Commissioning Phase, which has been delayed due to lockdown and hugely more complex to complete with the team at home rather than based at the Space Operations Center in Darmstadt.  However, as of today, our instrument has moved into regular operations, which will continue throughout the cruise phase, so we should now be able to start to generate some scientific return.”

Solar Orbiter, launched on 10 February this year, is completing its commissioning phase on 15 June and will commence its cruise phase, which will last until November 2021. During the main science phase that follows, the spacecraft will get as close as 42 million km away from the Sun’s surface, which is closer than the planet Mercury.

The spacecraft will reach its next perihelion in early 2021. The first close approach of the main science phase, in early 2022, will get as close as 48 million km.

Solar Orbiter operators will then use the gravity of Venus to gradually shift the spacecraft’s orbit out of the ecliptic plane, in which the planets of the Solar System orbit. These fly-by manoeuvres will enable Solar Orbiter to look at the Sun from higher latitudes and get the first ever proper view of its poles. Studying the activity in the polar regions will help the scientists to better understand the behaviour of the Sun’s magnetic field, which drives the creation of the solar wind that in turn affects the environment of the entire Solar System.

Since the spacecraft is currently 134 million km from Earth, it will take about a week for all perihelion images to be downloaded via ESA’s 35-m deep space antenna in Malargüe, Argentina. The science teams will then process the images before releasing them to the public in mid-July. The data from the in-situ instruments will become public later this year after a careful calibration of all individual sensors.