Telescope reveals most detailed images of the Sun

The largest solar telescope in the world, which was built by a team involving UCL Mullard Space Science Laboratory engineers and scientists, has captured the clearest and most detailed images of the Sun yet. 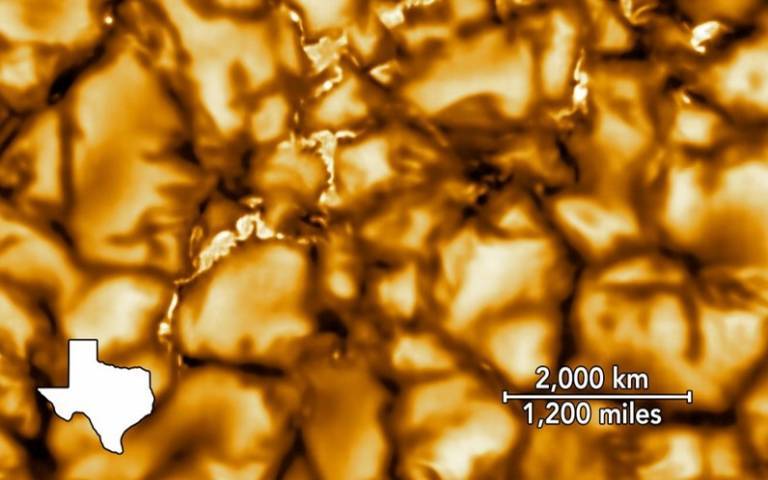 The first images and videos from the National Science Foundation’s (NSF) Daniel K. Inouye Solar Telescope reveal unprecedented detail of the Sun’s surface, with experts saying it will enable a new era of solar science and a leap forward in understanding the Sun and its impacts on our planet.

The new images from NSF’s Inouye Solar Telescope 4-meter solar telescope, which sits near the summit of Haleakalā in Hawaiʻi, show a close-up view of the Sun’s surface including a pattern of turbulent ‘boiling' plasma that covers the entire Sun. The images also show cell-like structures – each about the size of Texas – that are signatures of violent motions, which transport heat from inside the Sun to its surface.

Professor Sarah Matthews (UCL Mullard Space Science Laboratory), said: “The new images will help us study the Sun’s atmosphere in extraordinary levels of detail. In addition to working on ground-based telescopes, my team co-led the development of the EUV imaging telescope (EUI) on board the Solar Orbiter mission, which is due to launch from Cape Canaveral next month, to study the Sun up close. We hope our instrument will provide images of the hotter layers of the Sun’s chromosphere and corona that, together with the images captured from NSF’s Inouye Solar Telescope, will open up a new era in Solar Physics.”

The new images were taken with cameras developed and supplied to the project by a UK consortium which is led by Queen’s University Belfast. It involves seven other UK institutes and industry including UCL Mullard Space Science Laboratory, Andor Technology, Armagh Observatory, University of Glasgow, Northumbria University, University of Sheffield, St. Andrews University and University of Warwick, with funding provided by UK Research and Innovation’s Science and Technology Facilities Council.

Project Manager, Craig Leff (UCL Mullard Space Science Laboratory), said: “We worked closely with colleagues at Queen’s University Belfast and Andor Technology to ensure that the design specifications for the new cameras on the NSF’s Inouye Solar Telescope were met in order so that they were technically capable of revealing the Sun’s surface in unprecedented detail. In particular, we wanted to capture the origin and evolution of the solar magnetic field at the finest scales, which I’m pleased to say we achieved.”

Resolving these tiny magnetic features is central to what makes the Inouye Solar Telescope unique. It can measure and characterize the Sun’s magnetic field in more detail than ever seen before and determine the causes of potentially harmful solar activity.

“It’s all about the magnetic field,” said Thomas Rimmele, director of the Inouye Solar Telescope. “To unravel the Sun’s biggest mysteries, we have to not only be able to clearly see these tiny structures from 93 million miles away but very precisely measure their magnetic field strength and direction near the surface and trace the field as it extends out into the million-degree corona, the outer atmosphere of the Sun.”

Professor Mihalis Mathioudakis of Queen’s University Belfast, who led the UK consortium, said: “The imaging produced by the Inouye Solar Telescope opens new horizons in solar physics. Its imaging capability allows us to study the physical processes at work in the Sun’s atmosphere at unprecedented levels of detail. We worked hard over the past few years with Belfast-based Andor Technology to develop the cameras that equip the Inouye Solar Telescope and it is highly rewarding to now see this fascinating imaging.”

NSF’s new ground-based Inouye Solar Telescope will work with space-based solar observation tools such as NASA’s Parker Solar Probe (currently in orbit around the Sun) and the European Space Agency/NASA Solar Orbiter (soon to be launched). The three solar observation initiatives will expand the frontiers of solar research and improve scientists’ ability to predict space weather.

“These first images are just the beginning,” said David Boboltz, program director in NSF’s division of astronomical sciences and who oversees the facility’s construction and operations. “Over the next six months, the Inouye telescope’s team of scientists, engineers and technicians will continue testing and commissioning the telescope to make it ready for use by the international solar scientific community. The Inouye Solar Telescope will collect more information about our Sun during the first 5 years of its lifetime than all the solar data gathered since Galileo first pointed a telescope at the Sun in 1612.”