UCL/DKFZ team nominated for 'Physics Breakthrough of the Year 2020'

A team headed up by Joao Seco at the German Cancer Research Centre (DKFZ) and Simon Jolly of UCL High Energy Physics is among the finalists in the PhysicsWorld Breakthrough of the Year prize. 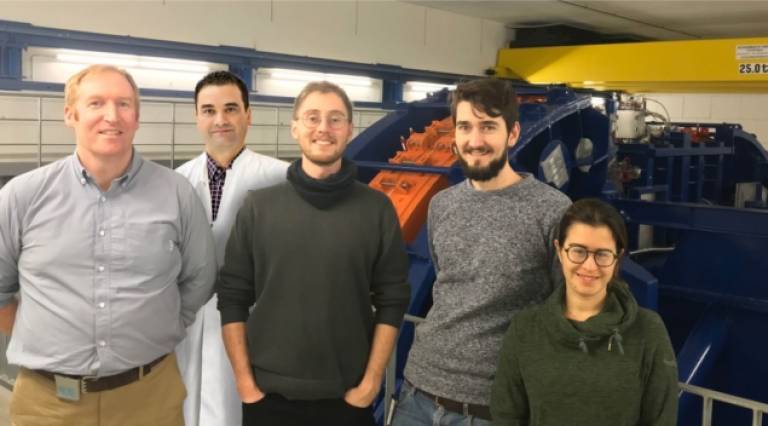 The research combined work from a team at UCL led by Prof Simon Jolly and his PhD student Laurent Kelleter – who had been working on a detector for efficient quality assurance in proton and ion beam therapy, with a team from DKFZ led by Prof Joao Seco with PhD student Lennart Volz, who had been working on image guidance in ion beam therapy by means of proton and helium ion imaging.

Traditional ‘external beam’ radiotherapy uses photons to attack tumours, with the unfortunate side effect of damaging health tissue in the vicinity. Ion beam therapy, which uses a beam of charged particles rather than uncharged photons, can be much more precise. Laurent Kelleter explains:

“Uncharged particles do not stop at any defined position. So when you shoot a photon beam into anything – be it a patient or a bottle of water – the photons will just gradually be absorbed, and the energy deposition curve looks exponential, it never quite goes to zero. With ion beams, the difference is that you have a clearly defined range, so the ions will stop at a pre-defined point, which is determined by the energy of the ions. What you do with ion beam therapy is to adjust the energy of the ions so that they stop in the cancer and deposit the maximum amount of energy there. That allows you to spare the healthy tissue – to make sure that the healthy tissue surrounding the tumour gets as small a dose as possible. Ultimately, what kills biological cells is the deposited energy, or deposited dose."

However, this property of ion beams also requires increased precision, in order to ensure that the energy is deposited at a point within the tumour. One idea is to add a small amount of helium ions to a carbon-ion treatment beam to enable monitoring during therapy. Thanks to their similar magnetic properties, the two ion species may potentially be accelerated simultaneously. As helium ions have about three times the range of carbon ions (at the same velocity) they travel straight through the patient while the carbon ions stop in the tumor and provide the treatment. In that way, the helium ions generate an online radiography that can be used to detect potential changes in the patient anatomy.

Carbon ion beam therapy is currently used clinically in a dozen treament centres worldwide, with more centres being under construction. However, helium beam radiography simply does not yet exist, as there is no helium beam in clinical use anywhere in the world. Laurent explains further:

“The initial idea of using this mixed ion-beam technique was provided by the GSI Helmholtz centre for heavy ion research and had been further developed at the German Cancer Research Centre in Heidelberg by Prof Joao Seco and his PhD student Lennart Volz. At the UCL side, we developed the detector that is shown in the schematic. We met at conferences more or less accidentally, and we found that our detector might be quite well suited for a test of this mixed beam technique. Once we realized that, we made the first measurements in 2018, final measurements in 2019 and published in 2020.”

The prize, awarded since 2009 by PhysicsWorld, is given to a piece of research which is:

The overall winner of the Breakthrough prize is an international team, who have created a silicon-based material which emits useful light. You can find details of this, and all of the other nominees, on the PhysicsWorld website (see links below).