UCL-led space mission incorporated by ESA and given funding boost

SMILE, a new space mission to study the impact of the solar wind on the Earth's magnetic environment, has been incorporated in the European Space Agency (ESA) Cosmic Vision programme and received additional funding from the UK Space Agency. 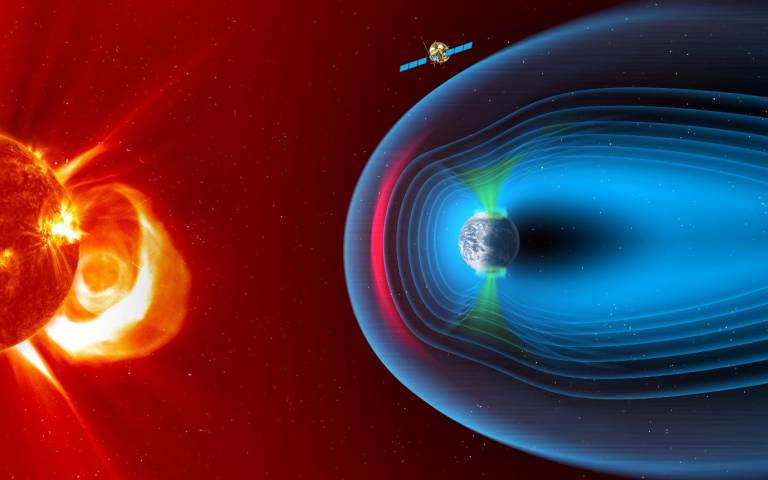 In particular, the SMILE mission will study how the solar wind interacts with the Earth's magnetosphere, which can impact on satellites, power grids and communications networks integral to our modern lives.

Professor Graziella Branduardi-Raymont, SMILE mission Co-Principal Investigator at UCL Mullard Space Science Laboratory, said: “Space weather remains one of the biggest risks facing humanity and SMILE will make a fundamental contribution in furthering our scientific understanding to help mitigate its impact. I am thrilled that we have achieved this significant milestone in the development of SMILE and the mission is now incorporated in the ESA Cosmic Vision programme.

“This is a crucial step for the UK institutes collaborating to make SMILE a success, and in particular its Soft X-ray Imager which is led by the University of Leicester, as adoption by ESA is a necessary step to secure funding from the UK Space Agency to support the development of SMILE to launch in 2023.”

The funding will be used to develop a Soft X-ray Imager (SXI) instrument, being led by the University of Leicester, with scientific mission leadership at UCL Mullard Space Science Laboratory, and support from the Open University, ahead of launch in 2023.

“SXI will be the first instrument to provide true global imaging of the solar wind exchange process within the magnetosphere. The results of which will have meaningful implications for safeguarding our environment on Earth.”

The new funding from the UK Space Agency brings the total UK investment in the SMILE instruments to £10 million and will build on the significant expertise found in universities across the country in the design and development of cutting-edge space science.

The Science Minister also announced the UK’s agreement with partners including the European Space Agency in a second mission, called Planetary Transits and Oscillations of stars (PLATO), which is scientifically led by the University of Warwick and will search for Earth-like planets orbiting alien stars.

“Space weather – such as solar wind – is a potential threat to our communications systems here on Earth so this research examining how the wind interacts with our planet’s electromagnetic system is important. Meanwhile, work to discover Earth-like planets around other stars may eventually lead to us answering the question of whether extra-terrestrial life exists.”

National funding for these missions is in addition to the UK’s regular contributions to the European Space Agency’s science programme.

Chris Lee, Chief Scientist at the UK Space Agency, said: “The UK’s involvement in the instruments onboard both of these missions underpins our separate industrial investment in SMILE and PLATO through our ongoing membership of the European Space Agency.

“SMILE is a prime example of scientific innovation underpinning the broader economy with real-world applications while PLATO’s innovative design is a game changer in Exoplanet science and our investment will ensure UK scientists and engineers will be leading participants in all aspects of the mission.”