Measuring the solar wind at the L5 point is essential for accurate future space weather forecasting, according to a UCL and University of Central Lancashire study. 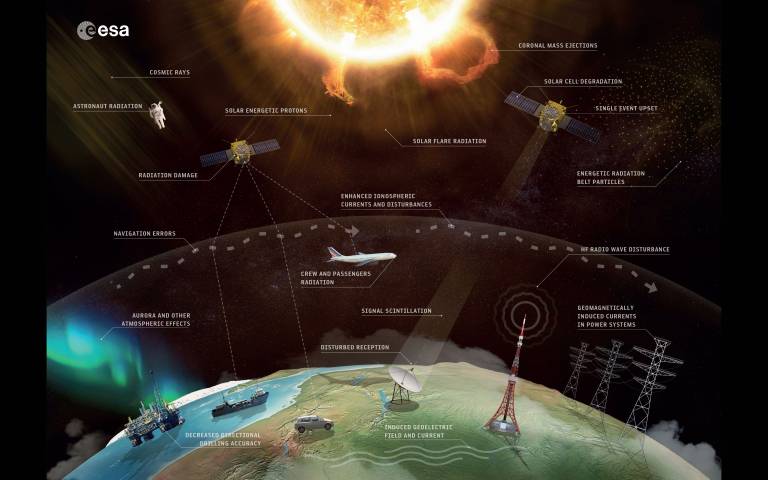 The so-called L5 point is 150 million km from the Earth and is a suggested location for a new UK-backed European Space Agency project to build a spacecraft that will be used to collect data for space weather forecasting.

The research shows the location gives more accurate predictions of the solar wind at the Earth than is currently possible with the available spacecraft, which strongly supports the positioning of new space weather monitoring spacecraft at L5. It would be at approximately Earth’s distance from the Sun, following the Earth along its orbit around the Sun, but lying 60 degrees behind the Earth.

This location was chosen because as the Sun spins, solar wind streams emitted from the same area of the Sun, reach the L5 point a few days before that same stream arrives at the Earth.

The solar wind is a gusty flow of particles and magnetic fields that blows out into the Solar System, enveloping all the planets including the Earth.

When there is a large eruption of material from the Sun, known as a coronal mass ejection, its propagation through the solar system is influenced by the solar wind it has to pass through. A fast wind may speed up an ejection and a slow wind will slow an ejection down. So, how long an ejection takes to reach the Earth, for example, depends on the conditions in the solar wind.

“The Earth’s magnetic field is being buffeted by the solar wind all the time and changes in the space environment around the Earth caused by the solar wind are described as space weather. While most space weather events are low level and don’t impact on our day to day lives, we are at risk from the most extreme space weather events that can impact on our use of technology so we are really interested in predicting how fast they will travel and therefore when they will arrive at Earth,” explained first author, Dr Simon Thomas (University of Central Lancashire, previously UCL).

“Space weather is number four on the UK National Risk Register as it could cause disruption to GPS and essential services, particularly air travel, energy and communications, and increase background radiation doses high in the atmosphere and in space. It’s therefore a priority to establish an accurate forecasting system,” added Professor Lucie Green (UCL Space & Climate Physics).

The team set out to establish whether solar wind streams remain fairly unchanged between the time that the stream flows over the L5 point and when it sweeps over the Earth. They did this by mimicking the Earth-L5 configuration using limited duration opportunities to work with existing spacecraft with realistic time delays to show the benefits of the location and approach.

L5 was also chosen because it is a stable point in which the spacecraft would stay without using much fuel. The scenarios looked at were when two spacecraft have previously been in the same configuration as L5 and Earth – one was considered the ‘space weather monitor’ and the other as the observations at (or near) Earth. The data were from NASA’s STEREO and ACE missions.

Ideas for the new ESA spacecraft are being developed at the moment and, if all goes well with funding, the spacecraft will be built in the coming years and launched around 2023.

The study is part of wider UCL involvement in the new ESA spacecraft.

Scientists and engineers at UCL Mullard Space Science Laboratory (UCL MSSL) are preparing to build one of the instruments to go on the space weather spacecraft and UCL is also in charge of managing the development of a set of complementary instruments.

The UCL MSSL instrument is being designed to measure particles in the solar wind allowing scientists to work out how fast the wind is blowing and how dense the wind is.

“This study has laid the groundwork to understand the best location for our instrument to operate in space and has confirmed that placing it at L5 is essential to the project being a success,” said co-author, Professor Andrew Fazakerley, Director of UCL MSSL.

“We want to make sure that we are fully ready to use the data provided by the L5 spacecraft to create more accurate space weather forecasts and in particular we want to make sure data from our instrument is used. It’s exciting to think that our expertise in designing and building space instruments for scientific research, can also be used in ways that will benefit modern society.”