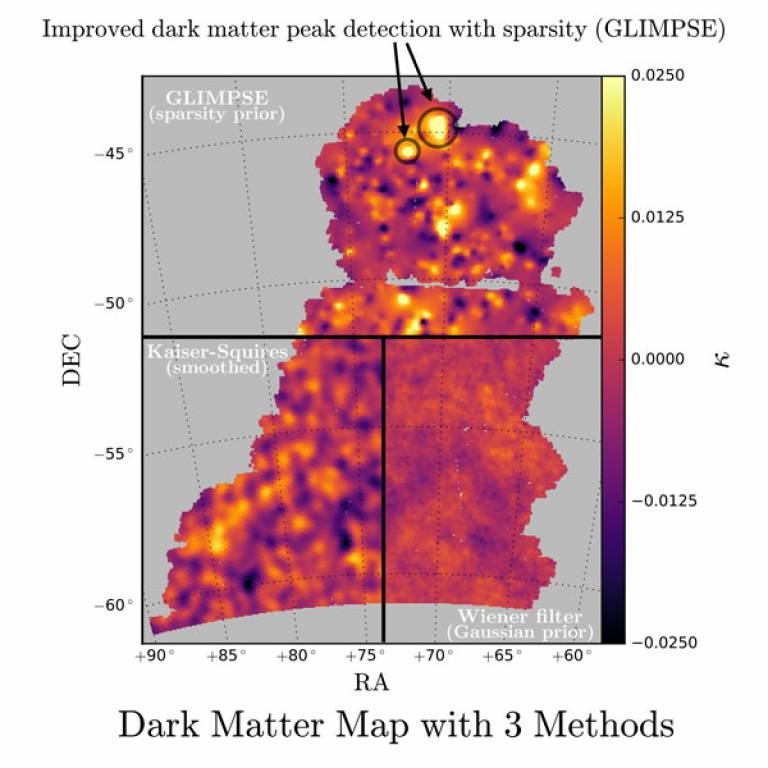 With improved maps of the Universe, it will be possible to gain more of an understanding of the properties of both Dark Energy (the unknown cause of the acceleration of the Universe) and Dark Matter (the invisible 80% of matter in the Universe).

Maps of Dark Matter are made using images of background galaxies distorted by foreground matter. This method, called weak lensing, is currently an invaluable technique to study the Universe.

This new work uses 1.6 million galaxy images from the Dark Energy Survey (DES) dataset that had previously been used, but now incorporates prior knowledge from theoretical models to improve the quality of the Dark Matter maps.

The Big Data methods enlisted to create these improved maps have varied applications beyond cosmology: environmental satellites, medical imaging and countless optimisation problems. The work was done in collaboration with the DEDALE project - a multidisciplinary European collaboration which designs novel techniques for analysing large and complicated data sets.

Professor Ofer Lahav (UCL Physics & Astronomy), a co-founder of DES and co-Director of UCL's  Centre for Doctoral Training Centre in Data Intensive Science added: "We see the remarkable growth of galaxy surveys, from only thousands of galaxies 30 years ago to hundreds of millions with DES and billions with the next generation of surveys.
The maps produced in this work demonstrate the power of new innovative methods for analysing future huge data sets."