Our technological society is relying more and more on space technologies in our everyday life (GPS, phone, weather prediction, etc.). Events such as solar eruptions can induce damages over several key networks, such as electrical grids, air traffic and telecommunications. Forecasting these events, a task which is at the heart of the fast-growing discipline of space weather, is becoming a growing concern. More and more institutions including national armies, UK MET office and European Space agencies are becoming interested and have started dedicated space weather forecast services. One of the main goals of space weather consists in predicting in advance the trigger of solar eruptions.

Over the last few years, solar physicists have analysed the properties of the magnetic field in active regions, hoping that one specific characteristic of these fields would allow an accurate and efficient prediction as to when and where an eruption would be triggered. Until now, even though numerous such quantities have been tested, the success rate in predicting a major solar eruption one day in advance is only about 40%.

Thanks to the international research effort lead by Dr. Etienne Pariat, astrophysicist at the Observatoire de Paris/CNRS, a frontier enabling a more efficient forecast of solar eruption may have been crossed. In this study, which has just been published in Astronomy and Astrophysics, this team has shown that a quantity, based on magnetic helicity, seems to possess the capability to represent the eruptive stage of solar active regions.

Magnetic helicity is a quantity which is related to the level of entanglement and twisting of the magnetic field. Using a new method to measure magnetic helicity developed by Dr. Gherardo Valori from University College London, it was recently proved that helicity possess several key properties such as being a conserved quantity in the solar atmosphere and during solar eruptions." explains Étienne Pariat, main author of the study. "Thanks to active regions recreated through computers, we can show today that a predictor based on magnetic helicity is able to predict in advance whether and in which cases, a solar eruption will eventually be triggered continued the astrophysicist".

For this theoretical study, Dr Pariat and his colleagues used 3D numerical simulations performed at the US Naval Research Laboratory by Drs James Leake (NASA Goddard Space flight Center, USA) and Mark Linton (Naval Research Laboratory, USA). These numerical simulations used computers to emulate the appearance of magnetic field in the atmosphere of the Sun and the formation of active regions. The initial conditions of these simulations are slightly modified so that some of them erupt and some do not.

Analysing the magnetic energy and helicity of these different parametric simulations, the scientists have noted that, while magnetic energies of the eruptive and non-eruptive simulations were very similar, their magnetic helicity content presented significant differences. "We observe that, in the case were no eruption is produced, the helicity predictor is low, while, for the eruptive case, this predictor is very high some time before the eruption" adds Etienne Pariat.

This study therefore paves the way for better and more reliable forecasts of solar flares. These theoretical results shall now be confirmed by observational analysis of solar active regions. 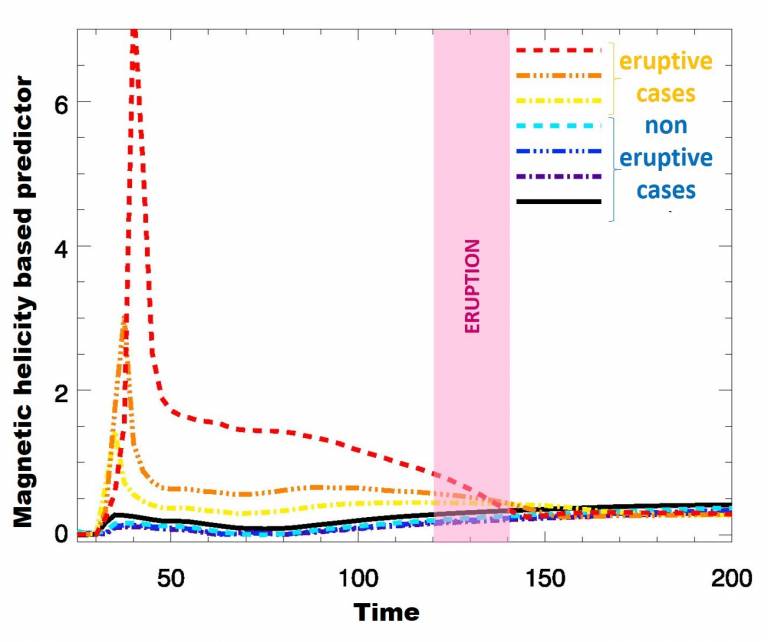