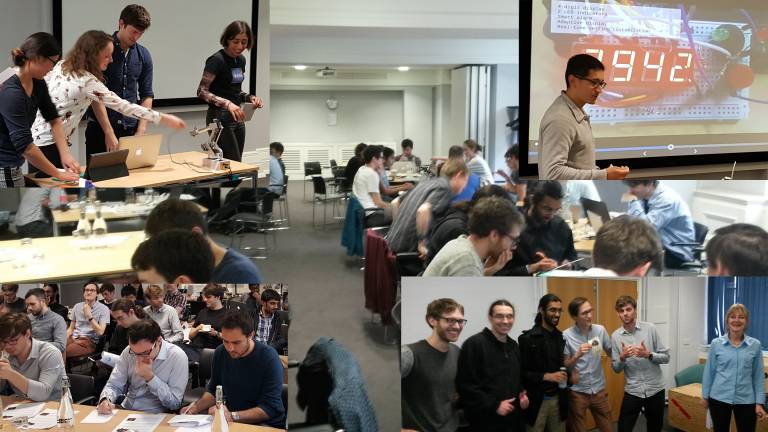 The students competed in seven mixed teams tackling a series of challenges to build devices, process data and code solutions to problems and present the finished product to a panel of judges from industry. This year's event was judged by data science companies ASI Data Science and Quantcast.

The winners of the Physics Hackathon were a team of PhD students Alex Ferrier, Andrew Bell, Satyam Ladva, Simon Schaal and Andrew Maxwell, who received the £250 prize from the Faculty Graduate tutor, Professor Tania Monteiro.

The event was sponsored by Deloitte Digital which supplied equipment such as a controllable robotic arm as well as an electroencephalogram (EEG) headset and monitor enabling brain signals to directly control games and other equipment. Two of the projects combined this equipment with codes developed over the second day of the Hackathon.

The winning project produced an Arduino controlled "Pong" game demonstrating the enduring appeal of retro games. A runner-up team demonstrated a numerical genetic algorithm to simulate the evolution of camouflage by predators and prey.

PhD student Henry Banks, team-member on the "mind-games" project which used an EEG monitor to drive a computer game built by the students, said, "I think this was the best Hackathon ever: the equipment and projects offered by the sponsors meant the projects were diverse and interesting.
No matter what their skills sets as mathematicians, in coding, electronics or just communications skills, there was something for all team members to do and contribute. In our project, one team member turned out to be especially gifted at generating the right sort of brain waves required to control the device!"