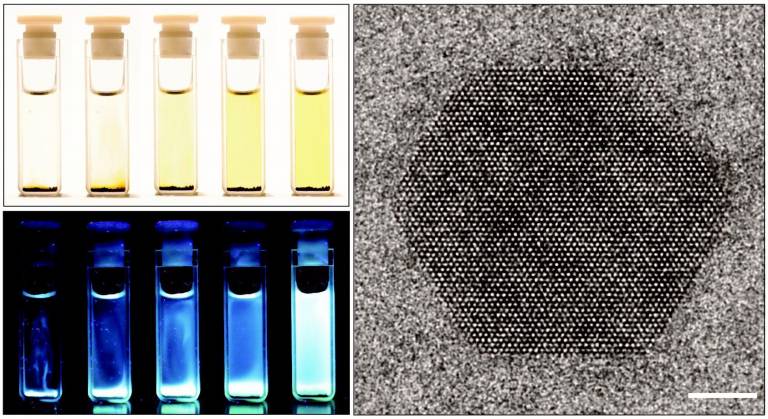 A team of researchers led by UCL Chemistry  and UCL Physics & Astronomy have shown that two-dimensional (2D) nanomaterials, which can be used to create LEDs (light emitting diodes) or solar cells, can be made by the simple, but unconventional, method of dissolution.

This new industrially scalable approach, published in Nano Letters, produces solutions containing fluorescent solutes that are defect-free, hexagonally shaped 2D nanosheets (See Figure 1). The method is in stark contrast to the standard alternatives, which rely on high energy input to delaminate layered materials, to produce meta-stable dispersions of fragments of 2D materials rather than pristine nanosheets.

"The work is part of our on-going research demonstrating that in some cases nanomaterials can be thermodynamically driven into liquids to form true solutions (similar to table salt dissolving in water), as opposed to the traditional view that nanomaterial dispersions are always meta-stable colloidal suspensions." explained Dr Chis Howard (UCL Physics & Astronomy).

The team from the Departments of Chemistry and Physics & Astronomy at UCL, the University of Bristol, Imperial College London and the École Polytechnique Fédérale de Lausanne, used advanced atomic force microscopy and transmission electron microscopy to investigate the structure 2D nanomaterials.

In the study, funded by the European Union's Graphene Flagship and the Engineering and Physical Sciences Research Council, the scientists showed that when these solutions were illuminated with UV light, they glowed (luminesced) with a distinctive colour. They went on to discover that this colour could be tuned by controlling the number of nanosheets stacked on top of one another.

"As we gain increased control over the dimensionality and functionality of carbon nitride nanomaterials we can begin to carefully tune their properties. This increases their potential for application in emerging technologies such as photocatalysis." explained Professor Paul McMillan (UCL Chemistry).