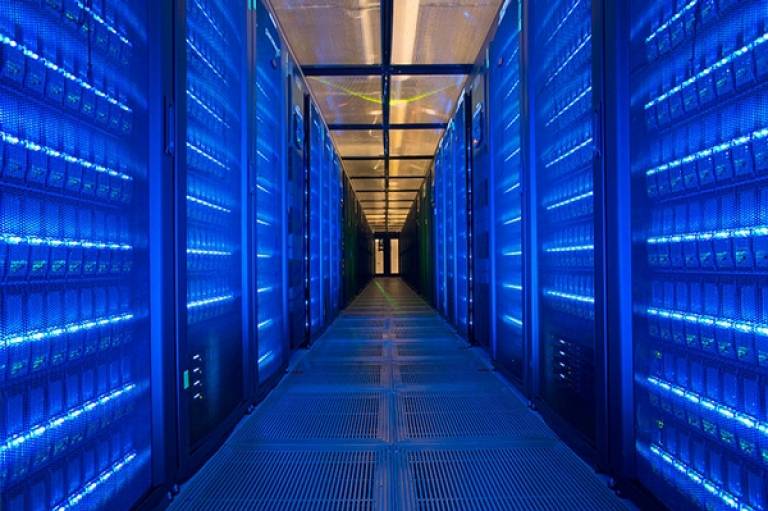 After a very competitive selection process, UCL has been chosen by STFC to host the Centre for Doctoral Training (CDT) in Data Intensive Science (DIS) and Technologies, the first CDT funded by STFC.

The Centre's ambition is to train a new generation of data scientists to become leaders in the field. By leveraging UCL's vast pool of DIS expertise across many disciplines, its world-class reputation in training and research, and its strategic location at the heart of the DIS industry in London's Knowledge Quarter, the Centre will become a hub of innovation and collaboration between industry and academia.

The CDT's cohort-based, assessed training programme is designed to deliver bespoke, high-quality training to our PhD students, which address the "skills gap". This will be complemented by a PhD research project in cutting-edge science that encourages activities that instil an ethos of collaborative data science, the ability to contribute to complex and long-term research projects and cross-disciplinary research. To provide the skills to engage effectively with business and industry, whilst also encouraging knowledge transfer between the academic and non-academic sectors, the studentships will also include a secondment at one of the 20 partner organisations of the CDT.

The 20 partner organisations will be fully engaged in the CDT research and training, covering a broad range of sectors and a good mix of providers and clients of DIS techniques, from IT, banking and media, to oil and gas exploration, cyber security, and transportation. They have pledged over 500k GBP of financial support, which, together with matching funds from UCL, will allow us to recruit a total of 12 studentships, in addition to the 15 funded by STFC, starting over the initial three years of the CDT operations.

UCL has an outstanding track record of international excellence and leadership in all the DIS-focussed research areas under STFC's remit. UCL researchers hold leadership roles in all the key international facilities that drive forward the DIS agenda, with pioneering work in a wide range of DIS techniques in all these areas.
These facilities are at the heart of the STFC Roadmap and have widely captured the attention of both the international physics community and the wider public, as typified by the 2011 and 2013 Nobel Prizes in Physics awarded for the discoveries of the accelerating universe and the Higgs boson respectively, both topics at the core of this proposal.

The UCL Particle Physics group plays a leading role on the ATLAS experiment, one of the two experiments at the Large Hadron Collider (LHC) that discovered the Higgs boson. Two goals of the LHC physics programme are to fully explore the newly discovered Higgs sector and to search for signs of new physics beyond the Standard Model of Particle Physics. Probing both areas will provide answers to fundamental questions about how the Universe functions. The research that will be carried out by the UCL Particle Physics group within the CDT, with particular focus on the development and application of pioneering DIS techniques, will be instrumental in fully exploiting the science potential of the LHC.

UCL Astrophysics, across the departments of Physics & Astronomy (UCL-P&A) and Space & Climate Physics at the Mullard Space Science Laboratory (UCL-MSSL), is one of the largest groups in the country, with internationally leading research strength in the study of cosmology, stars, nebulae, galaxies, planetary science, astro-chemistry, solar physics, space weather, high-energy astrophysics, laboratory astrophysics and instrumentation. UCL researchers hold leadership positions in many of the world's premier astronomical facilities and experiments, covering timelines from the present to well beyond 2020, and have been responsible for harnessing a range of DIS techniques in novel ways to solve problems in astrophysics, from molecular astrophysics and astro-chemistry, to studies of galaxies and the distant Universe.

Professors Nikos Konstantinidis and Ofer Lahav from UCL Physics and Astronomy will be the co-Directors of the CDT.

" "We are thrilled that UCL has been selected to host the STFC Centre for Doctoral Training in Data Intensive Science. It is a recognition of our world-leading reputation and leadership in Particle Physics and Astronomy research, as well as our pioneering contributions in data science and the collaborative spirit across disciplines within our institution. We are fully committed to create a Centre that will train the next generation of leaders in data science and act as a knowledge hub, aiding collaboration, both within and beyond the academic sector, which will accelerate the development and application of pioneering DIS techniques across the entire field", said Professor Konstantinidis.

While Astronomy and Particle Physics are at the core of the CDT's research programme, cross-disciplinary knowledge transfer is a central focus of the CDT. Over 50 academics from 6 UCL departments will lead the research projects and be actively involved in the Centre's activities, encompassing a diverse range of world-class expertise in both the development and application of ground-breaking DIS techniques.

" "It is remarkable that computer programmes developed for analysing astronomical and particle physics big data can be used to solve a much broader range of problems, from medical imaging to financial markets. The new STFC-supported centre will lead the way in this interdisciplinary research for doctoral training at UCL", added Professor Lahav.