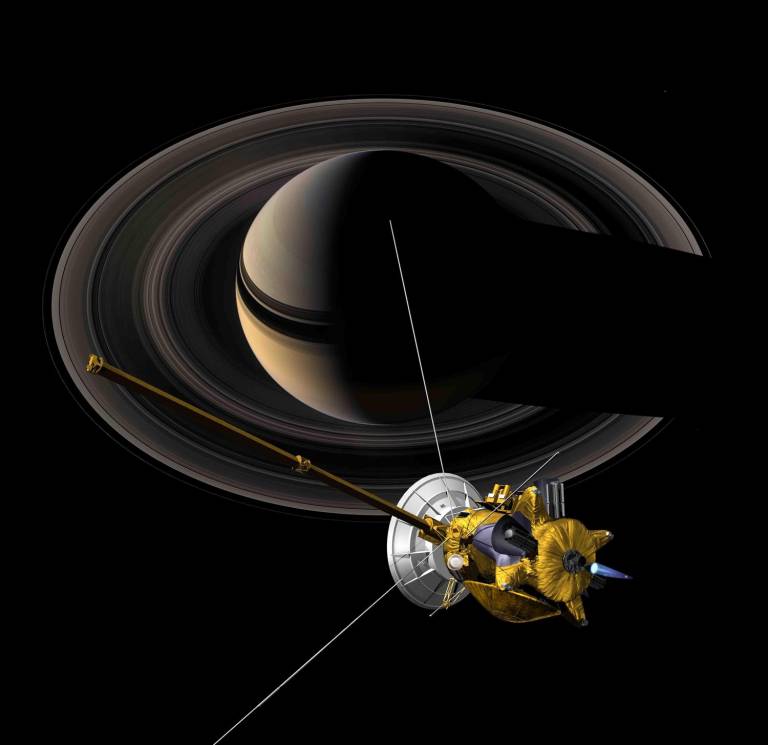 Scientists at UCL have observed how a widespread polar wind is driving gas from the atmosphere of Saturn's moon Titan.

The team analysed data gathered over seven years by the international Cassini probe, and found that the interactions between Titan's atmosphere, and the solar magnetic field and radiation, create a wind of hydrocarbons and nitriles being blown away from the top of its atmosphere into space. This is very similar to the wind observed coming from the Earth's polar regions.

Thanks to these unique features, Titan has been studied more than any moon other than Earth's, including numerous fly-bys by the Cassini probe, as well as the Huygens lander which touched down in 2004. On board Cassini is an instrument partly designed at UCL, the Cassini Plasma Spectrometer (CAPS), which was used in this study.

"Titan's atmosphere is made up mainly of nitrogen and methane, with 50% higher pressure at its surface than on Earth," said Andrew Coates (UCL Mullard Space Science Laboratory), who led the study. "Data from CAPS proved a few years ago that the top of Titan's atmosphere is losing about seven tonnes of hydrocarbons and nitriles every day, but didn't explain why this was happening. Our new study provides evidence for why this is happening."

Hydrocarbons are a category of molecules that includes methane, as well as other familiar substances including petrol, natural gas and bitumen. Nitriles are molecules with nitrogen and carbon tightly bound together.

The new research, published today in the journal Geophysical Research Letters, explains that this atmospheric loss is driven by a polar wind powered by an interaction between sunlight, the solar magnetic field and the molecules present in the upper atmosphere.

"Although Titan is ten times further from the Sun than Earth is, its upper atmosphere is still bathed in light," says Coates. "When the light hits molecules in Titan's ionosphere, it ejects negatively charged electrons out of the hydrocarbon and nitrile molecules, leaving a positively charged particle behind. These electrons, known as photoelectrons, have a very specific energy of 24.1 electronvolts, which means they can be traced by the CAPS instrument, and easily distinguished from other electrons, as they propagate through the surrounding magnetic field."

Unike Earth, Titan has no magnetic field of its own, but is surrounded by Saturn's rapidly rotating magnetic field, which drapes forming a comet-like tail around the moon. In 23 fly-bys which passed through Titan's ionosphere or its magnetic tail, CAPS detected measurable quantities of these photoelectrons up to 6.8 Titan radii away from the moon, because they can easily travel along the magnetic field lines.

The team found that these negatively-charged photoelectrons, spread throughout Titan's ionosphere and the tail, set up an electrical field. The electrical field, in turn, is strong enough to pull the positively charged hydrocarbon and nitrile particles from the atmosphere throughout the sunlit portion of the atmosphere, setting up the widespread 'polar wind' that scientists have observed there.

This phenomenon has only been observed on Earth before, in the polar regions where Earth's magnetic field is open and oxygen ions can escape. As Titan lacks its own magnetic field the same thing can occur over wider regions, not just near the poles. A similarly widespread 'polar wind' is strongly suspected to exist both on Mars and Venus - the two planets in the Solar System which are most Earth-like. It gives further evidence of how Titan, despite its location in orbit around a gas giant in the outer Solar System, is one of the most Earth-like objects ever studied.

The research is published today in the journal Geophysical Review Letters (GRL), in an article entitled "A new upper limit to the field-aligned potential near Titan"