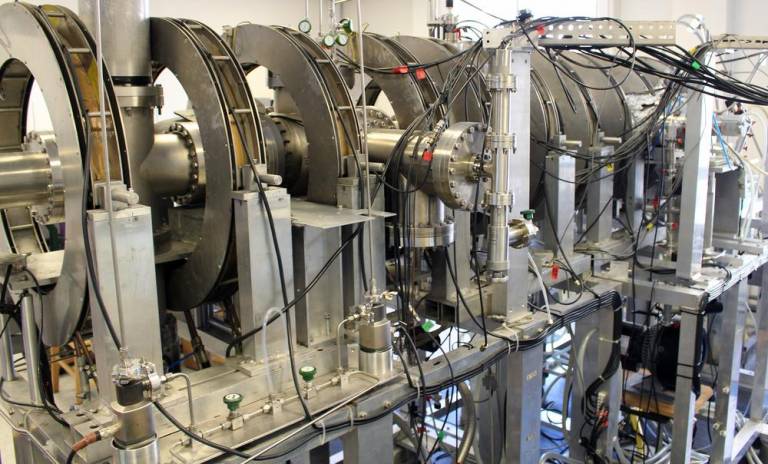 Collision physics can be like a game of billiards. Yet in the microscopic world, the outcome of the game is hard to predict.

Fire a particle at a group of other particles, and they may scatter, combine or break apart, according to probability distributions governed by quantum mechanics. These processes can tell us about fundamental properties of matter and, if antimatter projectiles are used, also about matter-antimatter interactions. Scientists at UCL have finally answered one of the basic questions that has remained outstanding until now: if, in a collision with matter, a positron - the antimatter counterpart of electrons - captures an electron, in which directions are the two likely to travel, and with what probability?

All matter particles - electrons, protons, neutrons - have an antimatter counterpart. Antiparticles have very similar properties to particles, but the opposite electrical charge. Although they are eventually annihilated when they come into contact with matter, antiparticles can briefly interact with particles to form very short-lived matter-antimatter hybrids, atoms in which one of the component particles has been replaced with an antiparticle. Of these, positronium - one electron and one positron in orbit around each other - is the most studied.

"Positrons and positronium are important for our understanding of the physical universe," says Gaetana Laricchia (UCL Physics & Astronomy), who led the study. "They are also useful for applications such as probing the properties of materials, as well as for medical diagnostics. Yet there is much that we still do not know about their interactions with ordinary matter." 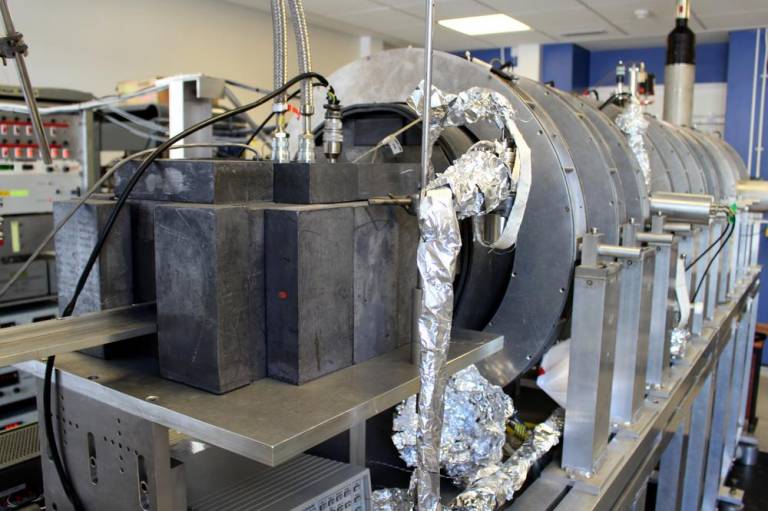 In the study, published in the journal Physical Review Letters, Laricchia and colleagues have used UCL's Positronium Beam - a facility unique in the world - to investigate the behaviour of the positronium as it is created, and have finally been able to compare with theoretical predictions which have been developed over the past 40 years.

The Positronium Beam works by producing a beam of positrons from a radioactive source, passing it through a chamber full of hydrogen, where the positrons bind to electrons to form positronium. The resulting beam of positronium is then usually used to bombard other targets placed downstream. In this study, though, the team examined the formation of the positronium atoms themselves - much like using a microscope to study the way light passes through lenses.

"From the collision, the positronium atoms may emerge forward, sideways or backwards. The absolute proportions had never been measured," says Laricchia. "We sought to analyse this because it tells you important information about how positrons collide in gases, how positronium behaves once it has formed and because it is a very sensitive test of theoretical models."

As well as the hydrogen gas that is usually used in the Positronium Beam, the team also measured the emission of positronium created when hydrogen was replaced with argon, helium and carbon dioxide. They found that in the case of helium and hydrogen, the emission of positronium was broadly in line with a small subset of theories; for argon, the behaviour seems similar to that created in hydrogen and helium and quite different from theoretical predictions. For CO2, there is no prediction to test, and this experiment provides the first data of any kind.

In all four cases, there was a strong preference for the positronium to be emitted in the forward direction, particularly when the positrons were hitting the gas at high speed.

The team hope to carry out further investigations of positronium formation, particularly at lower energies which should provide even better calibration for the theoretical models.

The work was funded by the Engineering & Physical Sciences Research Council.

Image credits: O. Usher (UCL MAPS).
These images may be reproduced without charge providing the credit is maintained.