Shedding light on why blue LEDs are so tricky to make 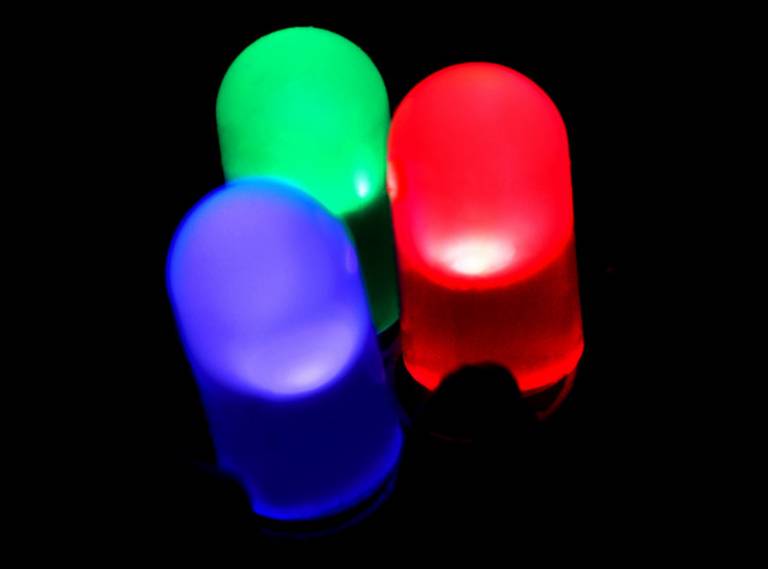 Scientists at UCL, in collaboration with groups at the University of Bath and the Science & Technology Facilities Council's Daresbury Laboratory, have uncovered the mystery of why blue light-emitting diodes (LEDs) are so difficult to make, by revealing the complex properties of their main component - gallium nitride - using sophisticated computer simulations.

Blue LEDs were first commercialised two decades ago and have been instrumental in the development of new forms of energy saving lighting, earning their inventors the 2014 Nobel Prize in Physics. Light emitting diodes are made of two layers of semiconducting materials (insulating materials which can be made conduct electricity in special circumstances). One has mobile negative charges, or electrons, available for conduction, and the other positive charges, or holes. When a voltage is applied, an electron and a hole can meet at the junction between the two, and a photon (light particle) is emitted.

The desired properties of a semiconductor layer are achieved by growing a crystalline film of a particular material and adding small quantities of an 'impurity' element, which has more or fewer electrons taking part in the chemical bonding (a process known as 'doping'). Depending on the number of electrons, these impurities donate an extra positive or negative mobile charge to the material. The key ingredient for blue LEDs is gallium nitride, a robust material with a large energy separation, or 'gap', between electrons and holes - this gap is crucial in tuning the energy of the emitted photons to produce blue light. But while doping to donate mobile negative charges in the substance proved to be easy, donating positive charges failed completely. The breakthrough, which won the Nobel Prize, required doping it with surprisingly large amounts of magnesium. 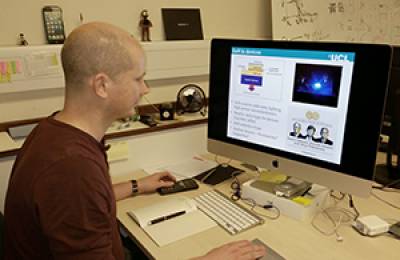 "While blue LEDs have now been manufactured for over a decade," says John Buckeridge (UCL Chemistry), lead author of the study, "there has always been a gap in our understanding of how they actually work, and this is where our study comes in. Naïvely, based on what is seen in other common semiconductors such as silicon, you would expect each magnesium atom added to the crystal to donate one hole. But in fact, to donate a single mobile hole in gallium nitride, at least a hundred atoms of magnesium have to be added. It's technically extremely difficult to manufacture gallium nitride crystals with so much magnesium in them, not to mention that it's been frustrating for scientists not to understand what the problem was."

The team's study, published today in the journal Physical Review Letters, unveils the root of the problem by examining the unusual behaviour of doped gallium nitride at the atomic level using highly sophisticated computer simulations.

"To make an accurate simulation of a defect in a semiconductor such as an impurity, we need the accuracy you get from a quantum mechanical model," explains David Scanlon (UCL Chemistry), a co-author of the paper. "Such models have been widely applied to the study of perfect crystals, where a small group of atoms form a repeating pattern. Introducing a defect that breaks the pattern presents a conundrum, which required the UK's largest supercomputer to solve. Indeed, calculations on very large numbers of atoms were therefore necessary but would be prohibitively expensive to treat the system on a purely quantum-mechanical level."

The team's solution was to apply an approach pioneered in another piece of Nobel Prize winning research: hybrid quantum and molecular modelling, the subject of 2013's Nobel Prize in Chemistry. In these models, different parts of a complex chemical system are simulated with different levels of theory.

"The simulation tells us that when you add a magnesium atom, it replaces a gallium atom but does not donate the positive charge to the material, instead keeping it to itself," says Richard Catlow (UCL Chemistry), one of the study's co-authors. "In fact, to provide enough energy to release the charge will require heating the material beyond its melting point. Even if it were released, it would knock an atom of nitrogen out of the crystal, and get trapped anyway in the resulting vacancy. Our simulation shows that the behaviour of the semiconductor is much more complex than previously imagined, and finally explains why we need so much magnesium to make blue LEDs successfully."

The simulations crucially fit a complete set of previously unexplained experimental results involving the behaviour of gallium nitride. Aron Walsh (Bath Chemistry) says "We are now looking forward to the investigations into heavily defective GaN, and alternative doping strategies to improve the efficiency of solid-state lighting".

The research is published in the journal Physical Review Letters, in an article entitled "Determination of the Nitrogen Vacancy as a Shallow Compensating Center in GaN Doped with Divalent Metals"