Students and staff at UCL's teaching observatory, the University of London Observatory, have spotted one of the closest supernova to Earth in recent decades. At 19:20 GMT on 21 January, a team of students - Ben Cooke, Tom Wright, Matthew Wilde and Guy Pollack - assisted by Dr Steve Fossey, spotted the exploding star in nearby galaxy Messier 82 (the Cigar Galaxy).

The discovery was a fluke - a 10 minute telescope workshop for undergraduate students that led to a global scramble to acquire confirming images and spectra of a supernova in one of the most unusual and interesting of our near-neighbour galaxies.

"The weather was closing in, with increasing cloud," Fossey says, "so instead of the planned practical astronomy class, I gave the students an introductory demonstration of how to use the CCD camera on one of the observatory's automated 0.35-metre telescopes."

The students chose M 82, a bright and photogenic galaxy as their target, as it was in one of the shrinking patches of clear sky. While adjusting the telescope's position, Fossey noticed a 'star' overlaid on the galaxy which he did not recognise from previous observations.

They inspected online archive images of the galaxy, and it became apparent that there was indeed a new star-like object in M 82. With clouds closing in, there was hardly time to check: so they switched to taking a rapid series of 1 and 2 minute exposures through different coloured filters to check that the object persisted, and to be able to measure its brightness and colour. 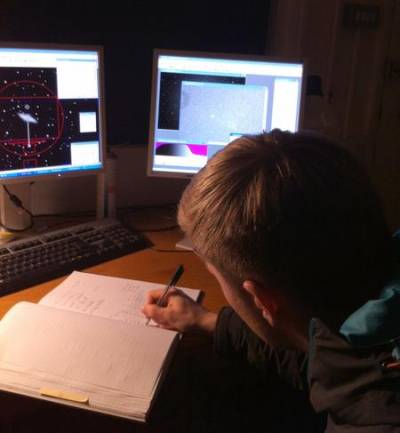 Meanwhile, they started up a second telescope to obtain a second source of data, to ensure the object was not an instrumental artefact. By about 19:40 GMT, the cloud cover was almost complete, but it was just possible to make out the new object in the second data set: this was a real astronomical source.

There were no online reports of any prior discoveries of this object, so it seemed clear that this was a new transient source, such as a supernova. It was important to move quickly to alert astronomers worldwide to confirm the discovery, and most importantly, to obtain a spectrum - which would confirm whether or not it was a supernova, rather than some other phenomenon, such as an asteroid that happened to lie in front of the galaxy. 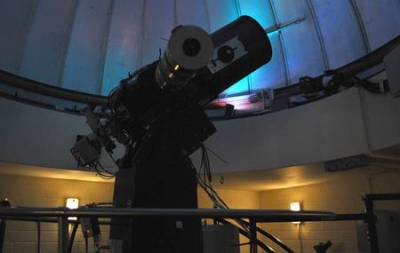 One of ULO's two 0.35-metre Celestron C14 telescopes. These were used to find the supernova in M 82
Photo: UCL MAPS/O. Usher

Fossey prepared a report for the International Astronomical Union's Central Bureau for Astronomical Telegrams, the organisation that catalogues supernovae. He also alerted a US-based supernova search, team who have access to spectroscopic facilities.

Spectra collected by astronomers at other observatories around the world suggest that it is a Type Ia supernova, caused by a white dwarf star pulling matter off a larger neighbouring star until it becomes unstable and explodes.

The IAU's official report last night (UK time; daytime 22 January in the US), confirms that Fossey was the first to report the new supernova, and gives the supernova the designation SN 2014J.

The two images here show the Cigar Galaxy before and during the event. Above, an image taken on 10 December 2013, and below the image taken by the students on 21 January 2014. A bright spot of light (labelled) is clearly visible, even though the exposure is shorter and the rest of the galaxy appears darker.

The supernova is one of the nearest to be observed in recent decades. The closest by far since the invention of the telescope was Supernova 1987A (the remnant of which was recently studied by UCL astronomers) in February 1987, located at a distance of 168 000 light years. This discovery is more distant at around 12 million light years, about the same as the 1993 discovery of a supernova in nearby Messier 81.

Ben Cooke: "The chances of finding anything new in the sky is astronomical but this was particularly astounding as it was one of the first images we had taken on this telescope. My career plan had been to continue my studies in astrophysics. It's going to be hard to ever top this though!"

Guy Pollack: "It was a surreal and exciting experience taking images of the unidentified object as Steve ran around the observatory verifying the result. I'm very chuffed to have helped in the discovery of the M 82 Supernova."

Tom Wright: "One minute we're eating pizza then five minutes later we've helped to discover a supernova. I couldn't believe it. It reminds me why I got interested in astronomy in the first place."

Matt Wilde: "To be honest it was just a really odd experience. We were expecting a standard quick look through the telescope and a chance to use the camera for the first time before the clouds moved in, that's all. When we started looking and Steve began getting a bit more excited none of us could really believe what was going on. I can't wait to get back on a telescope next week now."

Student logs observations on the night of the discovery

Celestron C14 telescope at the University of London Observatory