UCL researchers have developed a new type of LED which could help deliver secure, high-speed internet and eliminate the need to use radio waves that disrupt the functionality of some technologies. 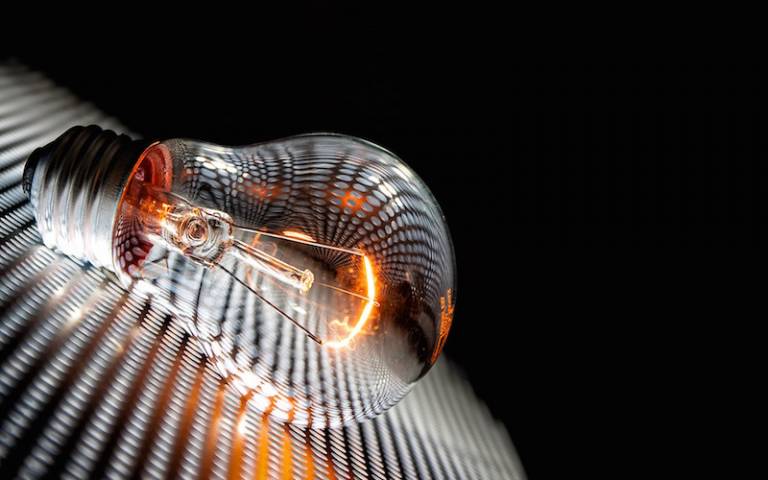 A new way of delivering high-speed internet through light emitting diodes (LED lights) is being developed by UCL academics.

Researchers from UCL, Northumbria University and Newcastle University are developing a new type of LED alongside new signals to use with them which could help to safely deliver secure internet in places that offer limited WiFi use, such as hospitals or aeroplanes.

Known as visible light communication, or ‘LiFi’, the technology will enable faster and more secure internet access by using visible light to transmit information instead of radio waves. Existing LEDs in ceilings can be turned on and off at a very high speeds - undetectable to the human eye – which can be used to can communicate with laptop, phone or tablet screens.

“As time goes on, the number of devices we all have at home that connect to the internet is always increasing. This is leading to a global shortage in the available spectrum that is available for us to use to browse the internet which is only going to get worse. At UCL, we thought about this problem carefully and we realised that lights in homes, offices, cars, aeroplanes, streetlights, etc., that already exist can be used to provide new, previously untapped bandwidth that complements what is already available. This will allow faster internet access speeds worldwide and go some way to solving the bandwidth crisis. We also decided to go one step further and introduce new devices, called polymer LEDs (aka PLEDs) which are based on organic materials synthesised at UCL. These devices are really cool because they can be flexible and are ultra-thin, and can be patterned into really large areas, a bit like a flexible tablet or phone. These two technologies go amazingly well hand-in-hand, and actually allow us to embed and bring internet access to your phones screen with absolutely no radio antennas at all.

The team are developing LEDs made from organic materials that can be incorporated into a thin film of just 4-500 nanometres (billionths of a metre) thick. These can then be integrated into phone or tablet screen to receive and transmit the LiFi signal. The team are looking at generation of new electronics and signals that best allow the new devices to ‘talk’ to each other as quickly as possible.

Using light instead of radio waves can produce internet speeds of up to several gigabits per second for every person connected, and can be safely used in areas where WiFi or other radio waves will interfere with critical equipment, such as in hospitals or aeroplanes, where WiFi is rarely allowed, or access speeds are heavily restricted.

The technology is expected to be in everyday use in the next five to ten years and has numerous exciting applications, revolutionising the way that we connect to the Internet.

This second episode in the Made At UCL podcast series features 3 disruptive discoveries stories. In this episode, our host Suzie McCarthy talks to Dr Paul Haigh about future technology that will send information on light waves rather than radio waves. Their conversation is featured second.