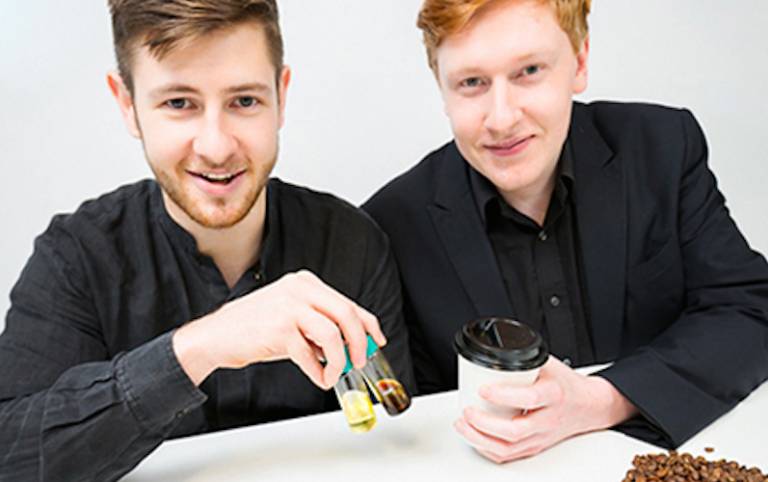 bio-bean, started in 2013, was the first company to industrialise the process of turning waste coffee grounds into advanced biofuel. Arthur came up with the idea for bio-bean while studying at UCL and later worked with Dr Paul Hellier (UCL Mechanical Engineering) to research new ways of reusing waste coffee grounds.

When they break down in landfill sites, coffee grounds release methane gas, which has a greenhouse effect 28 times higher than carbon dioxide. By preventing coffee grounds from going to landfill, bio-bean is helping the UK reduce its greenhouse gas emissions.

bio-bean also takes the used coffee and turns it into a carbon-neutral advanced biofuel. This replaces fuels like coal, natural gas and other wood fuels imported from around the world.

In addition to reducing the amount of methane gas from landfill sites, bio-bean is also helping to reduce CO2 emissions. bio-bean collects waste coffee grounds from Costa Coffee, totalling 3,000 tonnes of waste coffee grounds a year from over 800 Costa sites across the country. Recycling Costa’s waste has helped prevent 360 tonnes of CO2 emissions from entering the atmosphere each year. This is the equivalent of planting a forest the size of 95 football pitches.

But it does not stop there. The ambition is to power London from the coffee waste produced by Londoners. This will also help prevent 500,000 tons of waste per year from ending up in landfill – a result of the 17 million cups of coffee drunk daily in the UK. This third episode in the Made At UCL podcast series features 3 disruptive discoveries stories. 'Turning used coffee into clean energy' is featured third.