When slavery was abolished in Britain in 1834, the Government compensated slave owners the equivalent of £17 billion but slaves received nothing. UCL have led the national debate around the long term impact of colonial slavery. 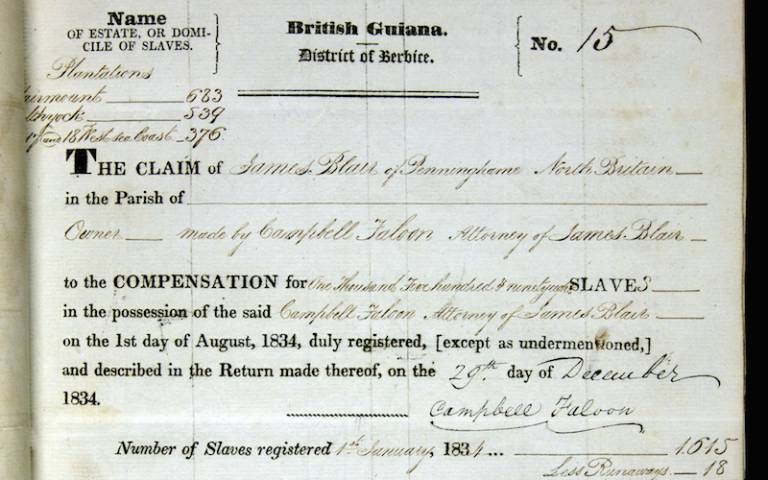 Ground-breaking research carried out at UCL’s Centre for the Study of the Legacies of British Slave-ownership has instigated a high-profile public debate about British slave-ownership – finding that it was of far greater significance to metropolitan Britain's economy, society, polity and culture than has previously been recognised.

The Slavery Abolition Act of 1833 formally freed 800,000 Africans who were then the legal property of Britain’s slave owners. What is less well known is that the same act contained a provision for the financial compensation of the owners of those slaves, by the British taxpayer, for the loss of their “property” following the 1833 abolition of slavery in the Caribbean as well as Mauritius and the Cape of Good Hope

Lead by Professor Catherine Hall (UCL History), the Centre Legacies of British Slave-ownership project published online, documented and analysed documents which, for the first time, allowed access to the identities of those who claimed compensation to the tune of around £17billion in today’s terms.

The researchers worked in partnership with the BBC to create Britain’s Forgotten Slave Owners was a two-part documentary created in partnership with BBC Studios in 2015, which revealed the extent of the slave trade in Britain at the time of abolition (1834) and the shocking decision of the government to compensate slave owners. The documentary received the Royal Historical Society's Public History Prize Winner award for Broadcasting in 2015 as well as the Specialist Factual BAFTA Television Award in 2016.

The revelations have inspired updated approaches to practice among key cultural institutions like the V&A, the Walpole Library, and the Oxford Dictionary of National Biography – who are amending entries to reflect the research. The Centre has also been instrumental in helping establish the New Imperial History, which argues that Empire was central in the formation of modern Britain.

The online resources that the project provides are vital to maintaining the public conversation on the legacy of black slavery and ensuring that tools are available for teaching in schools and universities.