Imagine recreating a book digitally that has been unreadable for more than 200 years due to fire damage. Imagine no more because UCL researchers did just this in a first for cultural heritage imaging and computer science. 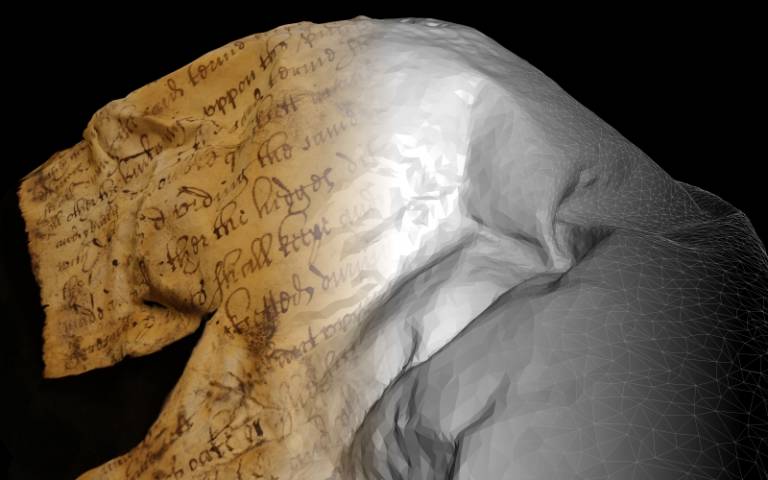 Badly damaged by fire and unreadable, the content of The Great Parchment Book of The Honourable The Irish Society had been lost to mankind for over 200 years. But in a remarkable project, UCL researchers reconstructed the text through digital imaging and the book now has UNESCO Memory of the World status due to being of ‘outstanding significance to the UK’.

The Great Parchment Book is a major survey compiled in 1639 by a Commission instituted under the Great Seal by Charles I, of all those estates in Derry managed by the City of London through the Irish Society and the City of London livery companies. Likened to the Doomsday book, it represents a hugely important source for the City of London’s role in the Protestant colonisation and administration of Ulster.

In 1786, the book was badly damaged as a result of a fire at Guildhall. Although 165 folios survived the fire, the uneven shrinkage and distortion caused by the fire had rendered much of the text illegible for over two centuries.

As part of an initiative by the London Metropolitan Archive to restore and transcribe the burnt, crumpled and fragile pages, UCL researchers from the Department of Computer Science worked in collaboration with the Centre for Digital Humanities to bring the book back to life using by developing bespoke software to digitise the book.

Led by Professor Tim Weyrich, the team successfully imaged over 300 pages - capturing 50 to 60 high resolution images of each page. Software was then developed to generate a 3D model which enabled the damaged pages to be viewed by dynamically flattening these models virtually on screen.

Commenting on the achievement, Tim said:

“The Great Parchment Book had effectively been lost to mankind for over 200 years. But by computer science researchers working in close collaboration with our colleagues in humanities, we were able to push the boundaries of cultural heritage imaging and computer science to bring this hugely important text back to life.

The virtual reconstruction of the Great Parchment Book featured as the centrepiece of an exhibition in Derry as part of the commemorations of the 400th anniversary of the building of the city walls. The published images and transcription will provide a lasting resource for historians researching the Plantation of Ulster in local, national and international contexts.

The project represents a major partnership of international significance between a number of institutions. On 21 June 2016, the Great Parchment Book of the Honourable the Irish Society was inscribed to the UK register of the UNESCO Memory of the World.

London Metropolitan Archives (LMA) is owned, funded and managed by the City of London Corporation on behalf of London and the nation. It is London’s archive service, collecting, preserving, celebrating and sharing the stories of London and Londoners and its many communities through collaboration, innovation and learning. It is responsible for 100 kilometres of the capital’s documentary heritage dating from 1067 to the present day, from parchment rolls to digital files. It is Accredited and its holdings are Designated by the Arts Council.

Key partners in the project were UCL, the Irish Society and Derry and Strabane District Council.

This fourth episode in the Made At UCL podcast series features 3 disruptive discoveries stories. 'Great Parchment Book rises from the ashes' is featured second.