Question 1: What inspired you to research decision-making under risk and in social contexts?

Answer: When people ask me what I do, I jokingly say that we study how mice play poker, which is the cartoon I have on my lab website. Really what I mean by that is decision-making under uncertainty and in social contexts. If you think about the core processes that go on in poker (or most decisions we make in real life), your decision is usually based on incomplete information and the outcome of your choice also depends on the choice of others. 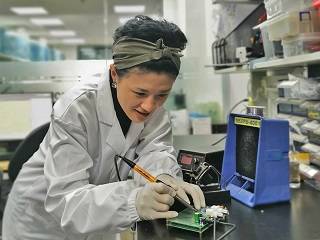 Studying these complex cognitive processes in animals will allow us to dissect the neural circuit mechanisms of flexible decision-making, and in turn working towards understanding and treating brain diseases where such flexibility fails. But first, how do we know that animals such as mice even have the capacity for higher cognition? If you think about adaptive behaviour in the wild, animals’ behaviour is actually quite complex and dynamic.

Imagine a hungry forager in the wild, choosing between a small guaranteed reward (fallen nut on the floor) and a big but risky reward (an insect). In a resource-rich environment, the animal may have the luxury to be risk-averse and slowly gather the small safe reward. But in a cold winter night, when the resource is scarce and the animal’s energy demand is high, gambling on a potential high nutrition prey could mean the difference between life and death.

These decision processes share the same core principles, although on a much simpler level, as the types of decisions you and I care about. In other words, animals have the neural architecture to engage in flexible innate and learned decision-making; and probing the mechanisms of complex decisions in animals could help us reveal common principles of choice behaviours.

Answer: Most real-life decisions are made not by us in isolation, but instead by people taking into consideration the choices of others. There may be a situation where you’re competing with someone, for example when you’re thinking about which university to attend. You have to think about your grades, but also how your peers are performing and how they are navigating the situation from their perspective.

What’s important here is that the outcome of someone’s choice not only depends on your own action, but also on the actions of others. But of course, once you put another agent into the decision-making process, things will become a lot more complex right away. I think for that reason, these kinds of decisions have been studied a lot in humans and more recently in non-human primates, but they haven’t been studied in the same way in rodents.

However, recent advances in experimental and analytical methods have opened new doors to towards understanding these complex, interactive decision-making processes in freely-moving rodents. And our lab plans to take advantage of this converging advancement in neuroscience and study social decision-making in more tractable animals.

Question 3: Could you elaborate on the implications of your research?

Answer: We want to understand how people make value-based decisions in a neuroeconomic framework. Addiction to gambling is one example of when the circuitry goes awry. But there’s another consideration: e.g. how individuals make certain decisions that result in either a positive or negative feedback loop in terms of finances. For example, my collaborator Jeffrey Erlich is very interested in how poverty affects the brain through long-term stress, and how that changes the neural circuitry to influence further choices which could get into a loop or the cycle of poverty. There are deep implications of these so-called neuroeconomic types of decision-making and understanding its neural circuitry.

As for social contexts, there are a lot of psychiatric diseases where people have impaired perception of social information or difficulty in integrating this information into their decision-making processes, therefore reducing the flexibility of choice. Therefore, understanding decision under risk and in a social context have significant implication both for basic understanding of how the brain generates complex behaviour as well as clinical relevance for disease models.

Question 4: What motivates you at the start of each day?

Answer: Talking about ideas with my peers gets me going. These can be general scientific questions or hypotheses, brainstorming with people in my lab. I love people gathering around coffee machines and asking each other how their projects are going, providing feedback, and bouncing ideas off of each other.

Now that I’ve opened my lab, every day I think about how to make it a good working environment for people to thrive in. I think about that a lot: as a group leader, we’re no longer doing everyday experiments ourselves, so it’s very important to provide a good environment for people to feel energised both in terms of ideas and experiments, as well as work and the kind of community that makes them motivated.

I think about how to build an environment where people feel comfortable collaborating: asking for and giving help to each other. What gets me excited is the science aspect as well as the mentoring aspect.

Question 5: How have you adapted your approach to research during the pandemic?

Answer: I only moved to London around late-June and before that I was in Shanghai, which was mostly pandemic-free. So luckily most of my research hasn’t been affected as much as some of those of other members of the community. For a lot of people it was difficult. I can see how, if I were here, the most important thing would have been to make sure that people know they still have a community. Science is pretty lonely sometimes, especially when you run into problems. A lot of the issues are resolved when people are just next to each other and can help each other out. And when that’s not happening, either because of quarantine or people not being able to come to work, then I can see how it can be very difficult, especially for early career scientists. If I were here during last year’s lockdown as a group leader, that would have been the most important thing: to make sure people were okay and knew that things will be different, that they were not alone.

Question 6: What area of your work most excites you and why?

Answer: I love problem-solving and getting experiments going. For most scientists, the ability to enjoy problem-solving is the key to happiness. I remember when I was an undergraduate going into graduate school, one of my colleagues said to me that: “what really differentiates people is whether you get defeated by initial failing attempts or just try an alternative and make seemingly slow but continuous progress”. But sometimes it’s easy to fall into a defeated state. I’ve learned from various people in my scientific career that simply staying positive and enjoying problem-solving is one of the key things to be able to make progress.

When people ask me, what do you like about being a scientist, at different stages of my career it would have been different things. But fundamentally it’s really the ‘fun’ aspect. In our discipline, we’re trying to understand how the brain works and how that influences behaviour. For me, that’s one of the most interesting questions one could ask. Honestly, I wake up thinking we’re the luckiest people: to be surrounded by peers who are also really interested in this question and can inspire each other. I really value the interaction I have with people.

Question 7: If you hadn’t gone into academia, which career path would you have been interested in?

Answer: I remember being asked this very same question during my graduate school interview and struggling to answer! I’ve always wanted to be a scientist, even during early school years. If I had to think really hard about an alternative career path, I would go for a different job that also requires a lot of innovation, problem-solving and creativity. A lot of the jobs are not necessarily like that though and that’s why I feel so lucky because most days are different.

Sometimes I wonder whether the broad implication of what we do matters – there are more urgent issues in the world and one could make an impact that seems immediately more significant. But basic science is so valuable because you never really know (and I have to remind myself of this) what piece of knowledge is going to be the key insight that will trigger the next most important discovery.