Professor Tim Blackburn is a Professor of Invasion Biology in the Research Department of Genetics, Evolution & Environment, in the Division of Biosciences. We met up with him recently to talk about his research and what motivates him. Here's what he told us.

Question 1: What first attracted you to the area of invasion biology and what would you say to encourage any budding scientists to follow you?

Answer: Apparently I would stand by the window and point at birds before I could talk. This innate passion drove me to a Bachelors degree in zoology at the University of Manchester, and then, lacking other ideas, to a D.Phil. at Oxford. A decade of postdocs at Imperial College’s Centre for Population Biology followed, before I moved on to a lectureship at the University of Birmingham, and then to be Director of the Institute of Zoology. I have been at UCL since 2014. 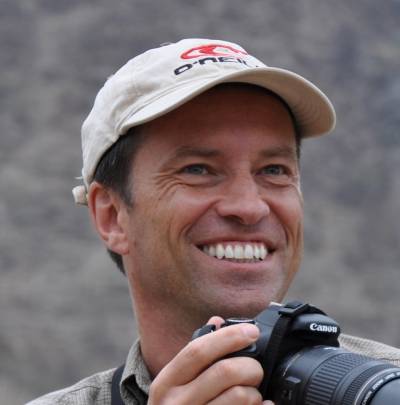 My interest in invasion biology grew very quickly from my first visit to New Zealand. I was looking forward to seeing the unique native birds there, but what really struck me was the flocks of alien birds from Europe. Yellowhammers, greenfinches, goldfinches, blackbirds, and song thrushes, amongst others, were all much more abundant there than back in the UK. Yet none of these species should have been there – all were alien species introduced by people (who were themselves mainly colonists from Europe). It raised so many questions that it sparked a whole new direction for my research.

To any budding scientists, I would say – find a subject that really interests you. Research can be fun, but also can involve a lot of hard and tedious work. If you aren’t truly motivated, it’s easy to lose your enthusiasm.

Question 2: What would you say are the main challenges in biodiversity and conservation for the UK, and how would this compare with challenges faced by other countries?

Answer: UK nature is particularly degraded – we usually come out badly in lists of countries with well conserved biodiversity. In many countries, the challenge is to keep what nature is already there. For ours, it is to reverse the process of loss, and to start to repopulate our degraded landscapes with rich and extensive habitats (of native species!).

Question 3: If you hadn’t gone into academia, which career path would you have been interested in?

Answer: I have no idea! I’ve always had a passion for birds. If I hadn’t been lucky enough to stumble into a career researching them, I’d probably have been a very unhappy accountant.

Question 4: What do you most look forward to when you begin teaching new students?

Answer: Showing them new creatures! Most of my teaching is on field courses, and it’s always exciting when the students find animals they had no idea existed. Ecological sampling is often very simple – burying a plastic cup in the ground and seeing what falls in, for example – but what it reveals can be magical. My student field courses were more than 35 years ago but the memories are still bright. I love how students get lost in the excitement of discovery too.

Question 5: Describe your ideal place for a field trip.

Answer: Probably Blakeney Point. I’m lucky that I already get to lead field courses there. I just wish they lasted all summer!