James Davis, UCL History student writes about the LGBTQ+ writers who inspire him. 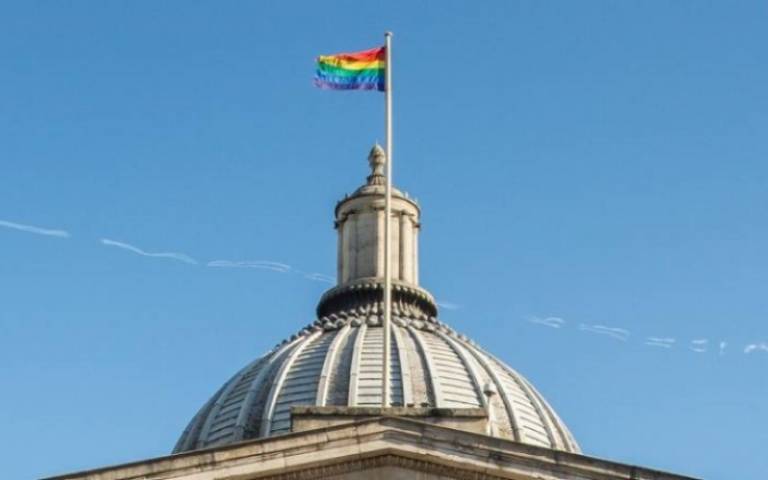 LGBTQ+ authors, academics, poets and playwrights have made an outstanding contribution to the field of arts, culture and scholarship. At UCL we are lucky to have a large body of LGBTQ+ authored resources readily available from our library.

As busy students it may not always be immediately obvious what background or identity authors have; this is not necessarily a bad thing as each text has a unique contribution and every author a unique identity. However, LGBTQ+ History Month gives us an opportunity to delve deeper into the backgrounds of some of the most successful authors, allowing us to appreciate the special contribution LGBTQ+ people make to cultural and academic life.

In this article, I have focused my attention on Federico Garcia Lorca, Oscar Wilde and Michel Foucault and why I am inspired by them.

I discovered the poems of Federico Garcia Lorca by accident whilst doing some personal research on the lead-up to the Spanish Civil War (1936-1939) and was instantly captivated by his literature.

Well-known for his surreal and modernist style coupled with a rich backstory and historical context, Lorca’s work is fortified by deep emotional power. In 1936, Lorca was brutally assassinated by fascists for being a socialist and gay man. But in 38 years, Lorca had made his name as a significant literary, political and historical figure.

In this month I think it is apt to share the inspiration that can be drawn from his Dark Love Sonnets available in Selected Poems (translated by Martin Sorrell) that he was revising at the time of his murder. These sonnets encapsulate the ways in which Lorca is simultaneously a literary marvel and LGBTQ+ icon.

Published fifty years after Lorca’s death, hidden by censorship and criminalisation of homosexuality, the sonnets provide an insight into an expression of “forbidden love” intended for an unknown lover. The political and emotional contexts, shrouded in a mystery about the intended recipient, uncovers the danger and torment LGBTQ+ people faced in their search for authenticity and self-expression.

Writing these poems was brave, for which Lorca is a cause for acclamation.

The Soul of Man under Socialism by Oscar Wilde

Oscar Wilde is probably one of the most preeminent gay writers in Britain and many of you will have seen The Importance of Being Ernest or read The Picture of Dorian Gray. Whilst I would highly recommend both, and stress their ready availability from the library, I would like to draw attention to a lesser-known work called The Soul of Man under Socialism. This masterful social commentary takes a unique stance on socialism and altruism that challenges fin de siècle Victorian philanthropy and, equally, our own modern conventional wisdom on the ills of poverty and barriers to social inclusion.

Wilde’s irreverent challenge to Victorian institutions and distinctive lucidity in exposing the hypocritical moral undertones of contemporary society is inspirational. His confidence and ability to expose elusive or uncomfortable truths is admirable.

As a history student, I can’t help but sense Wilde’s knowledge of Marx, but his tone curiously speaks to both libertarian and anarchist ideologies making this a useful source in the history of political thought.

This month, we should draw inspiration from the way in which Wilde’s experiences as a member of the LGBTQ+ community can provide us with deeper inferences behind his ground-breaking contribution to social commentary in this essay.

The History of Sexuality by Michel Foucault

Finally, I would like to raise awareness about the scholarship of Michel Foucault.

I was first introduced to Foucault at the beginning of my degree initially finding his historical, sociological and philosophical concepts challenging and difficult to grasp. However, after much perseverance I grew an affection for the sophistication with which he provides useful tools for, amongst other things, historical analysis. Recently I have been using the concept of the “cultivation of the self” available in his History of Sexuality (translated by Robert Hurley).

But don’t be fooled by my historical purview, this book is not only useful for a history student – in fact, it offers an extensive philosophical insight into sexuality as far back as ancient times.

With LGBTQ+ History Month in mind, this is as an especially important time to learn more about LGBTQ+ self-expression, along with the ways in which sexuality is more generally understood by society and individuals alike. Sadly, Foucault died of AIDs-related complications in 1984 leaving behind a wealth of scholarship that revolutionised the humanities and social sciences. Despite Foucault’s polarising nature (which I believe is a greater reason to learn about him!), it is his legacy of academic theories and concepts that keeps his name on the tips of students’ and professors’ tongues that is inspiring. Being able to sympathise with the lived experience of an author or academic produces a deeper meaning to the words they write. As a history student, I find the life stories of LGBTQ+ people inspiring. It is especially fascinating how, in many cases, the endurance of harrowing adversity and persecution failed to diminish LGBTQ+ writers’ illuminating success and time-honoured contributions.

Even though I have only given a small snapshot of the UCL Library’s extensive collection of LGBTQ+ authored material, I hope that by sharing the writers that inspire me encourages you to make best use of the library to discover your own inspiring LGBTQ+ authors and academics.