UCL Library Services recently participated in an event to celebrate the 150th anniversary since the birth of author Natsume Soseki (Natsume Kinnosuke), one of the greatest Japanese novelists of the 20th century. 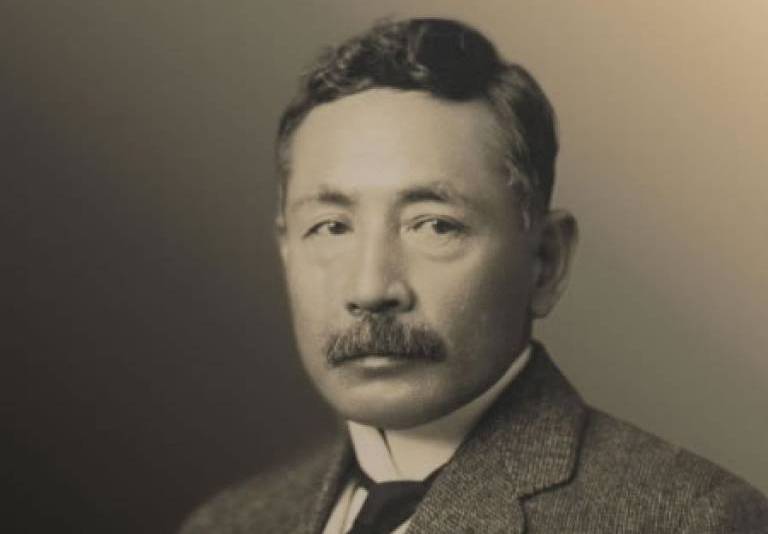 The theme at this year's UCL-Japan Youth Challenge (a special summer school for British and Japanese High School/Sixth Form students) was 'Soseki in the UK'.

UCL ran a special lecture 'Natsume Soseki versus William Shakespeare: Two Heavyweights of World Literature' delivered by Dr. Damian Flanagan, an award-winning author and an expert on the works of Soseki. Flanagan has authored: 'The Natsume Soseki the Japanese Don't Know' and 'Natsume Soseki: Superstar of World Literature'. He also translated 'The Tower of London: Tales of Victorian London', which Soseki wrote based on his experience of living here, for which he won the prestigious Japan-US Friendship Commission Prize for the Translation of Japanese Literature.

Kazuteru Arai, President of the Dai Nippon Printing Company, Ltd Bureau in Paris, presented an initial 8 volumes to UCL; the full set of 29 books will be released monthly until 2019 and copies sent to the Library at UCL. Ben Meunier, Director of Operations for UCL Library Services, received the works and thanked Iwanami Shoten for their generous donation to the Library.

The donated collection of Soseki's work will be available from the autumn of 2017, after they are catalogued as part of UCL's College Collections.

Soseki studied in London from 1900 to 1902 and attended some classes at UCL. After returning to Japan he worked at Tokyo University where he began to start his career as a novelist, drawing on his experiences from his time in the UK. His work was influenced by Shakespeare and a range of contemporary British novelists.

Most Japanese students are exposed to his work in high school and his stories are regarded as culturally iconic. Soseki's face was on the 1000 yen note for achievements during his lifetime.

The UCL Main Library hosted an exhibition on Soseki in 2013, to mark the 150th anniversary of the arrival of the Choshu Five at UCL. View the exhibition catalogue.