The Main and Science Library Customer Service Team are pleased to announce an exhibition by two artists which will run in the UCL Science Library during the summer. Crispin Hughes and Susi Arnott have been collaborating with Swedish mathematician Sofia Olhede (UCL Big Data Institute) on inter-tidal spaces and fluid dynamics - particularly in relation to the concept of movement passing a fixed point and movement observed from a device that moves while observing phenomena. These two perspectives are called 'Eulerian' and 'Lagrangian' approaches respectively. 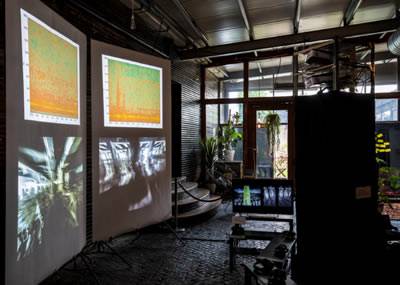 Sofia introduced Crispin and Susi to these frames of reference and, inspired by this concept, they produced simultaneous image sequences and sound recordings during a tidal cycle in central London, from two perspectives that were close together, and observing each other. 'Bobby', a timelapse camera and stereo audio recorder, limited only by its tether, could float free on the rising water, while 'Stillman', a second set of camera and sound apparatus, was fixed. Different analyses of the resultant data sets were then juxtaposed on screen. The effect is extremely beautiful and encapsulates the way in which art and science intersect to produce a satisfying aesthetic experience.

The exhibition, scheduled to run from late July until mid-September in the Science Library Cafe, will consist of two simultaneous timelapse recordings of a full, un-edited tidal cycle in central London projected on a loop onto a large screen. The images are accompanied by an audio feed that may be listened to on headphones. There will also be a companion installation in the Science Library Learning Laboratory showing timelapse recordings from various vantage points on The Thames which students and visitors can observe at leisure - the results are extremely hypnotic and relaxing - and we hope to invite some guest speakers along to discuss their work in this field a little later on.