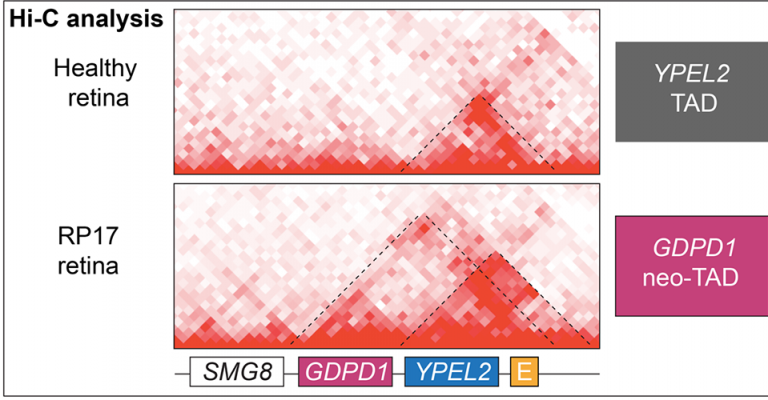 Led by UCL IoO Professor Alison Hardcastle and her collaborator Dr Susanne Roosing from Radboud University Medical Center, the study presents a new cause of dominant Retinitis Pigmentosa in 22 families with over 300 affected individuals. This research was made possible by Retina UK as the major funder of the UK Inherited Retinal Disease Consortium, with partner funding from Fight for Sight UK.

“It was a challenge to identify the DNA alterations causing this form of Retinitis Pigmentosa. Most other changes identified as the cause of retinal diseases affect the sequence (“spelling”) of a gene. In these 22 families we did not find gene changes, instead we identified complex re-arrangements of chromosome 17.”

The next challenge was to investigate how re-arrangements of this chromosome might lead to retinal degeneration. The research team used stem cells from people living with this type of RP and, through a painstaking process, turned them into a ‘retina in dish’ to model the condition. They found that the three-dimensional chromosome structure was altered so that a gene called GDPD1 inappropriately made contact with a molecular ‘on’ switch for expression in the retina. This means that the protein production process in retinal cells “reads” the GDPD1 genetic instructions when they should be ignored.

“This represents a new mechanism of retinal disease, and new understanding of how alterations of the human genome can cause inherited conditions. We hope our discovery and new knowledge will now lead to many more similar discoveries. It was such a pleasure to work with our international collaborators, including researchers in Cape Town and Berlin.

The team’s breakthrough in understanding the genetic basis for this type of RP means that researchers can start developing potential treatments to slow disease progression and preserve vision.

A member of the family involved in the study, Sue Perkins said:

“Finding a cause, let alone a cure, seemed almost t impossible at when I was first diagnosed with retinitis pigmentosa over 30 years ago. I hope this work will not only help us in the future, but also other family groups with similar conditions. It has been a privilege to have a glimpse at this pioneering work. Thank you for opening the window to possiblity.