A poster by Sarah Houston, a 3rd-year PhD student at the UCL Institute of Ophthalmology (IoO), won the overall prize at the annual STEM for Britain poster competition held at the UK Parliament this week. 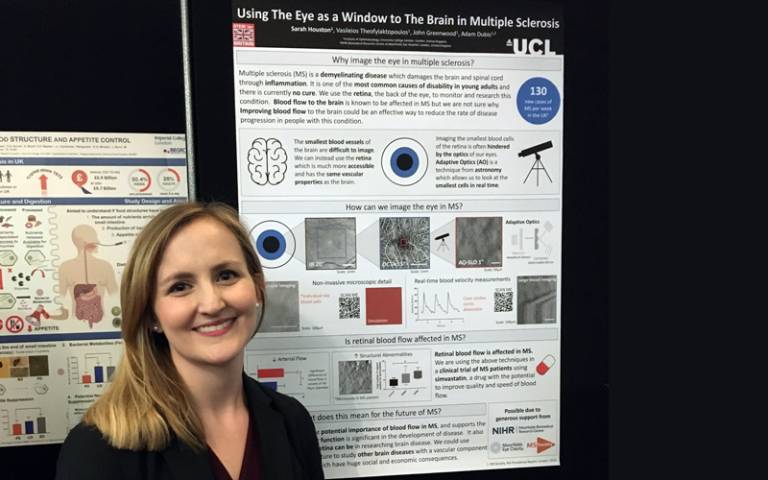 On 9 March, UCL Institute of Ophthalmology PhD candidate Sarah Houston was named overall winner at the final of the annual STEM for Britain poster competition 2020 during a special event at the UK Parliament, held to coincide with British Science Week.

Sarah won the Gold Award for the best poster in the Biosciences category, receiving a prize of £2,000. She then went on to be named overall winner, receiving the Westminster Medal (awarded in memory of Dr Eric Wharton). This is a major achievement, as 300 posters were submitted from across the UK on wide range of topics across Engineering, Maths, Physics, Chemistry and Bioscience. These included several other entries from UCL.

The awards were announced at an exhibition of the best posters organised at Parliament's Portcullis House and attended by a large number of parliamentarians keen to show their support for the STEM sector. Sarah was presented her awards by Stephen Metcalfe MP, Chair of the Parliamentary and Scientific Committee, and Sue Wharton, widow of the competition’s founder, Dr Eric Wharton.

Sarah’s top award in this prestigious competition highlights the success of the IoO’s interdisciplinary and cross-site collaboration within the UCL Faculty of Brain Sciences. Her achievement also reflects the outstanding work of one of her supervisors, Adam Dubis, and the whole team working on this project across the IoO, Moorfields Eye Hospital and the UCL Queen Square Institute of Neurology.

Sarah’s win demonstrates how accomplished she was at presenting her data, but also how well she conveyed the importance of this multidisciplinary research. It’s a marvellous illustration of how fortunate we are to be able to draw on the wide range of expertise across UCL, Moorfields and The National Hospital for Neurology and Neurosurgery, Queen Square, to tackle such a complex biomedical question.

Sarah Houston’s poster was based on her PhD thesis focussing on ‘The Retinal Microvasculature in Multiple Sclerosis’. Her work has been funded by the Multiple Sclerosis Society and Moorfields Biomedical Research Centre, and used sophisticated imaging equipment purchased through funding from Moorfields Eye Charity.

Her project, which clearly impressed the judges, involves capturing high-resolution images of the human retina to investigate the effect of multiple sclerosis on vascular structure and function, and how statin therapy may improve outcomes.
Sarah is a qualified Clinical Vision Scientist, having completed her BSc in Human Biology and her MSc in Clinical Science (Neurosensory Sciences).

Sarah entered the competition after encouragement from Dr Stephen Benn (Director for Parliamentary Affairs at the Royal Society of Biology) and Stephen Metcalfe MP at a UCL ‘Introduction to Science Policy Workshop’ two years ago.
When asked for her top tips for producing a winning (and accessible) poster, Sarah said “Make it really clear, use colours wisely and ask for feedback from lots of people”.

About STEM for Britain and the poster competition

STEM for Britain works to raise the profile of UK early-career researchers in parliament by promoting research among members of both the House of Commons and House of Lords.

The annual poster competition, which began in 1997 (then known as SET for Britain), is open to early-career researchers from across Britain, e.g. MSc, PhD students and post-doctoral researchers. The winners are judged by senior scientists from the Learned Societies, who first select the participants on the basis of abstracts submitted. Successful applicants are then asked to produce a poster that is accessible to a lay person.
On the day of the final, the competition judges visit the exhibition, engaging with individuals about their posters before choosing the winners in each category. The exhibition itself is usually attended by around 100 parliamentarians, with additional prizes awarded on the day by societies and sponsors.