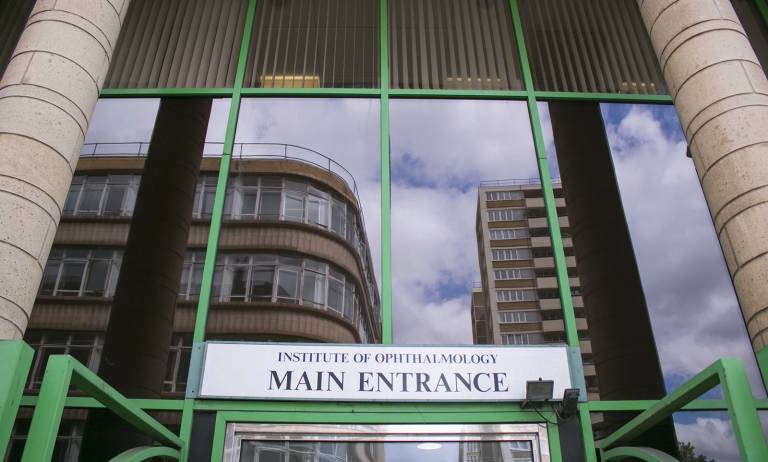 A proof-of-concept study carried out at UCL Institute of Ophthalmology with funding from Fight for Sight has highlighted the potential of a targeted antisense oligonucleotide (ASO) therapy to treat Fuchs endothelial corneal dystrophy patients with a mutation in the TCF4 gene. Results from the study are published this week in The American Journal of Human Genetics.

Fuchs endothelial corneal dystrophy (FECD) affects the inner layer of the cornea, known as the endothelium, which is comprised of a specialised layer of corneal endothelial cells. In a healthy eye the endothelium acts as a leaky barrier, tightly regulating levels of corneal hydration and nutrition. In FECD, this barrier becomes impaired resulting in corneal swelling and clouding leading to loss of vision and blindness. Patients with FECD usually begin to exhibit symptoms at age 50.

Currently the only treatment option available to restore vision and prevent blindness for FECD patients is invasive corneal transplantation, a surgical procedure with the risk of graft rejection.

Fight for Sight, the UK’s leading eye research charity, supported this work with an early career investigator award made to Dr Alice Davidson. The project aimed to identify known and new genetic causes of corneal endothelial dystrophies (CED) and to find out whether there's an overlap of relevant genes between common and rare types of CED.

Dr Davidson has demonstrated that the formation of RNA aggregates (RNA foci, clusters of RNA) have a toxic effect and underlie the disease pathology of FECD.

The use of a corneal endothelial cell (CEC) model derived from FECD patients, revealed that repeated expansion of three DNA bases, known as a triplet repeat, led to the formation of these toxic nuclear RNA aggregates.

Dr Alice Davidson demonstrated that antisense oligonucleotide (ASO) treatment led to:
• Reduced RNA aggregates (foci) in patient cells
• A reduction in the toxic downstream effects of the RNA foci
These results highlight the potential of using an ASO therapy to treat the toxic entities that arises due to a mutation in the TCF4 gene.

An ASO-based treatment could offer an innovative therapeutic approach which could benefit the majority of individuals affected by this condition.

Dr Alice Davidson, a Fight for Sight funded researcher, from UCL Institute of Ophthalmology said: “In the UK more than 1,000 patients per year undergo invasive corneal transplant surgery to prevent sight loss caused by an age-related condition called Fuchs endothelial corneal dystrophy (FECD). Given the ageing population and the global shortage of appropriate donor tissue available for such surgeries there is currently great clinical need for alternative and effective treatment strategies to be devised. We have developed an antisense oligonucleotide (ASO) drug which targets a specific genetic mutation that is responsible for approximately 75% of FECD cases. Using patients’ corneal cells grown in the lab, we have demonstrated the utility of this treatment and with continued research and investment we hope our proof-of-concept study will pave the way for a new effective and less invasive way to treat this common and sight-threatening condition.”

Neil Meemaduma, Research Manager at Fight for Sight, said: “We are pleased that this research has uncovered a potential new treatment for FECD patients. The current treatment option depends upon acquiring healthy donor material and the use of specialist facilities. This potential approach addresses the genuine need for alternative treatments for individuals living with FECD.”