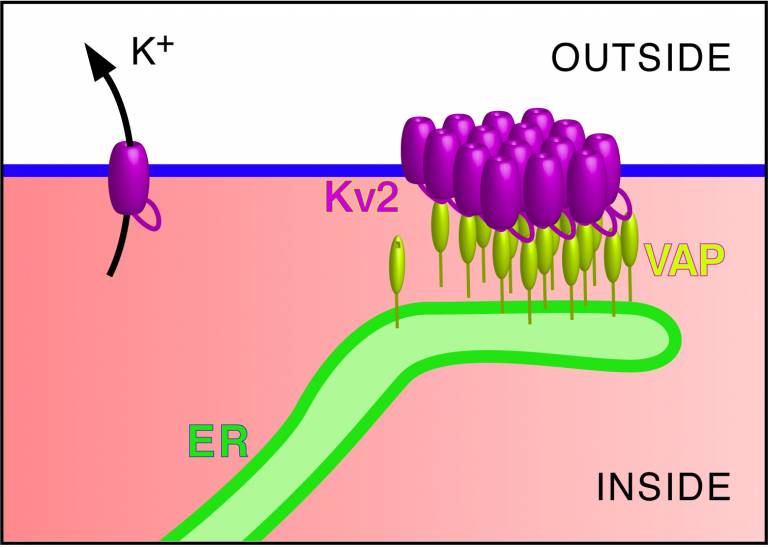 Nerve signals are transmitted when positively charged sodium ions cross the cell surface and change the voltage gradient across the membrane. This change in voltage is kept very brief by potassium ions, also positively charged, exiting the neuron through potassium channels.

Kv2 (referring to two closely related proteins Kv2.1 and Kv2.2) is the most important potassium channel in the brain. Kv2 channels are spread widely across the surface membrane of the neuron, allowing potassium to flow out from all parts of the cell. In addition, Kv2 concentrates in patches at that part of the cell from which the axon emerges, this being the long extension that carries messages to other nerve or muscle cells. Until recently, these Kv2 patches were mysterious, especially since the patches contain channels that do not allow potassium flow.

The formation of the patches has now been understood by Drs Levine and Tamkun (Colorado State University), who have published their results in the Proceedings of the National Academy of Sciences (USA).

The researchers’ current work was sparked in 2015 when Dr Tamkun’s lab identified an additional function for Kv2: it acts like glue to bind the surface membrane to strands of an intracellular membrane network called the Endoplasmic Reticulum (ER). The ER extends strands that touch all other cellular components, not just the surface membrane. The tiny regions where the surface membrane touches the ER were first discovered in the 1950s, but even 60 years later there had been no convincing examples of a glue protein before Kv2. The next step was to identify the ER partner protein that Kv2 binds to.

Dr Levine’s team looked for clues in the amino acid sequence of Kv2 for what it might bind to. They had previously discovered that a group of over 50 proteins contain short loops with a specific combination of amino acids that bind to a protein in the ER called VAP (unhelpfully this acronym stands for Vesicle-associated membrane protein-associated protein). The most obvious VAP-binding loops include a unique combination of six amino acids, binding to VAP like a key in a lock. The team found a distantly related set of amino acids in Kv2. Only one of the six key amino acids is absolutely correct, however this amino acid had previously been shown to be essential for Kv2 patch formation.

Dr Tamkun’s team then confirmed the prediction. They showed that Kv2 and VAP strongly interact in cells, including in living neurons. The formation of Kv2 patches and the gluing of the surface membrane to the ER both depend on VAP.

This is significant because low levels of VAP or mutations that reduce VAP function cause motor neurone disease. Thus, among the 50+ proteins with the motif, the research team believes the new interaction they have identified may explain what makes motor neurons highly vulnerable to VAP defects. This increases our insight into a devastating and all too common disorder.