We work on the broad biological question of how lipids and proteins interact inside cells, using budding yeast. Understanding lipid metabolism is of great medical importance for diseases prevalent in the Western world, including important ophthalmic diseases (such as Age-related macular degeneration), and major brain disorders (Alzheimer's and Parkinson's). Intracellular lipid metabolism is conserved between humans and yeast so that the new understanding we gain is clinically and commercially relevant.

We have found that lipid traffic across narrow cytoplasmic gaps where organelles come very close to each other. These so-called membrane contact sites have multiple redundant bridging complexes, and lipid traffic can take indirect routes. Therefore, instead of the traditional genetics route, we have used a candidate approach. We first studiedVAP, a ubiquitous ER-anchor. More recently, we discovered LAMs, a conserved family of Lipid transfer proteins Anchored at Membrane contact sites. 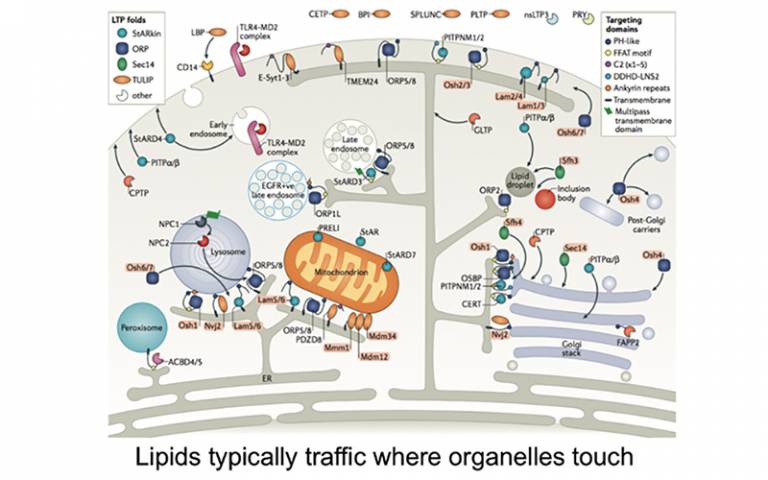 We have a long-standing collaboration with F2G Ltd (Manchester), the UK’s only biotech company dedicated to developing new anti-fungal drugs. Currently, we have two industrial Cooperative Awards in Science & Technology (CASE) studentships studying aspects of Olorofim. This small molecule, which is the founder member of the novel Orotomide class of anti-fungals, is currently in Phase IIb clinical trials to treat and cure highly lethal invasive fungoses caused by Aspergillus and other fungi. One project (BBSRC funded, worked on by Eoin Laws-Quinn) studies how the drug induces fungal death rather than just holding the cells in stasis. Another project (MRC funded, worked on by Salma Mohamed Darwish) studies how the drug can be modified to target other invasive fungi, in particular the “superbug” Candida auris, which has caused increasing numbers of untreatable infections across the globe since its first discovery in 2009.