Students who achieved a D or grade 3 in GCSE maths are less likely to take A levels or get a degree than those who got a C or grade 4, but there is little evidence it will make a difference to their overall life satisfaction at age 20. 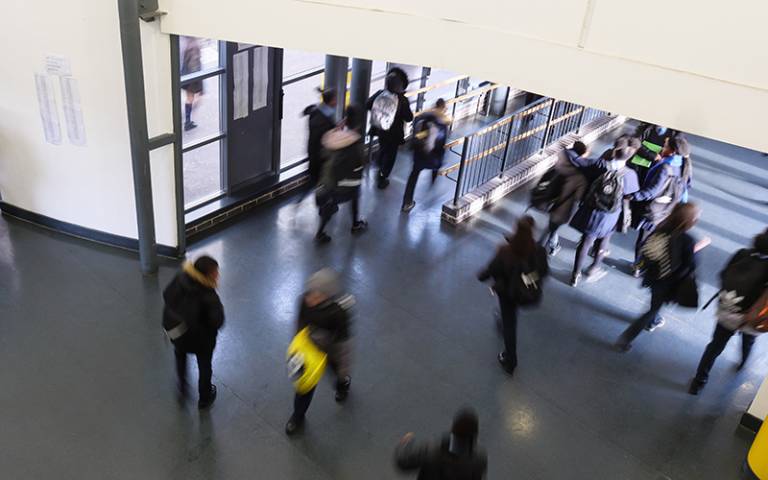 The new peer-reviewed study by IOE, UCL’s Faculty of Education and Society, published by the British Journal of Educational Studies today, used data from the Next Steps Study to track the educational, labour market and socio-emotional outcomes of millennials who achieved D and C grades in mathematics through to age 26.

Professor John Jerrim (UCL Social Research Institute) said: “In England, failing to achieve a ’good pass’ (C/4 grade) in key subjects is thought to have serious negative implications. GCSEs can seem the be-all and end-all of life to secondary school pupils, with many young people putting themselves under pressure to do well in their exams.

“While many will get the grades they hope for, some will inevitably end up feeling disappointed and we wanted to find out how much not getting a C or 4 grade really matters.”

Professor Jerrim looked at comparable C and D grade pupils from similar demographic backgrounds with similar Key Stage 2 and 3 scores and who had similar GCSE subjects.

The study showed that pupils obtaining a C in maths were more likely to progress further in education and obtain more qualifications. For example, those who gained a C had a 32% chance of holding a degree by age 26, compared to a 22% chance for those with a D.

There was also some tentative evidence of lasting labour market effects, with those obtaining a D in maths more likely not to be in education, employment and training (NEET) at age 26 than comparable pupils with a grade C (21% versus 10%).

When it came to mental health, there was however, little evidence that pupils with a grade D end up being any less satisfied in life, or that they experience any detrimental impact upon their mental health. Around 30% of students reported a possible mental health issue at age 17 regardless of which grade they received. At age 20, 80% of students who received at grade C reported high life satisfaction compared to 77% who received a grade D.

Professor Jerrim points out that although the Next Steps cohort took their GCSEs in 2006, he repeated a similar analysis for a younger cohort and found similar results. “In some respects, hitting the key C/4 grade in a subject like mathematics really matters. It opens the door to certain educational pathways, meaning you are more likely to get a degree, with some evidence that this then feeds through to labour market rewards.

“On the other hand, it doesn’t seem to make much difference to young people’s wellbeing, or their happiness in life, as a result. It is therefore important that parents, teachers, schools and society send an appropriately balanced message to young people.”

The paper suggests that there could be a need for GCSEs to move away from a defined set of grades and towards a continuous measurement scale with pupils awarded a score between 1 and 100, for example. Alternatively, if grades are to be retained, computer adaptive testing (tailored to the examinee’s ability) should be introduced for GCSEs to increase precision around high-stakes grade boundaries.

Professor Jerrim added: “GCSE grading will be even more important given the government’s plans to restrict student loans to only those individuals who achieve a grade 4 in English and mathematics.

“If the government is going to restrict student loans to only those students who achieve a grade 4 in English and mathematics, then it’s vital that marking around this grade boundary is as accurate as it can possibly be. Yet we know that marking – particularly in English – does not have great levels of reliability.

“Providing GCSEs online – and drawing upon the power of computer-based assessment – may help the government to ensure that young people don’t unjustly miss out on university finance due to the bad luck of just missing out on a 4 grade.”

Professor Jerrim recognises the analysis of the labour market outcomes is also still at a relatively early age, as young people’s careers are developing and future research should seek to follow participants through into their thirties, as careers (and age-education-earnings profiles) stabilise.

This research was funded by UK Economic and Social Research Council (ESRC) grant.