The STEM Participation & Social Justice research group, formally known as the Science Capital research group, encompasses a number of research projects based at IOE and led by Professor Louise Archer.

The group has grown from projects based around the concept of science capital, with an explicit commitment to social justice.

Our teams are involved in a range of research and development projects that seek to understand and challenge injustices in STEM engagement and participation.

We work in partnership with policy-makers and practitioners to develop helpful approaches and tools. 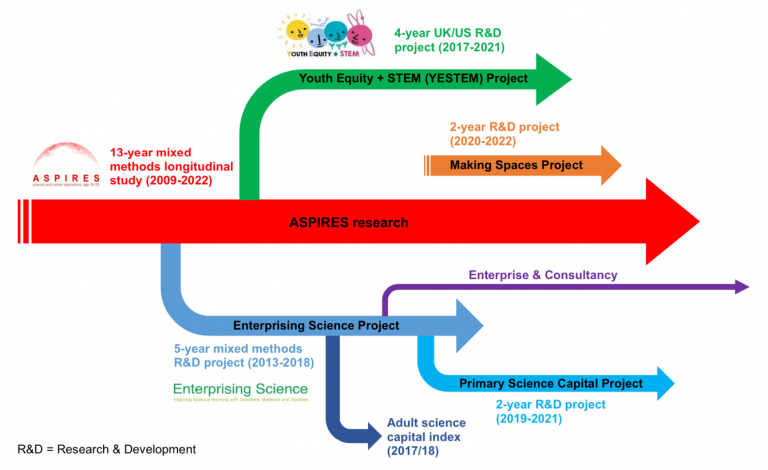 Read a text-only version of the infographic.

Science capital is a concept that can help us understand patterns in science participation - why some people engage with science and others do not.

In particular, it helps shed light on why particular social groups remain underrepresented in post-16 science, and why many young people do not see science careers as being 'for me', nor see themselves as a 'science person'.

The concept of science capital can be imagined like a bag, containing all the science-related knowledge, attitudes, experiences and resources that you acquire through life. It includes what science you know, how you think about science (your attitudes and dispositions), who you know (for example, if your parents are very interested in science) and what sort of everyday engagement you have with science.

Deriving from the sociology of Pierre Bourdieu, the idea of science capital was developed by Professor Louise Archer and colleagues as a conceptual device to capture an individual's science-related resources and dispositions.

Today it is widely used in science education research, policy, and practice. We have recently investigated how science capital can be connected to STEM capital.

Science capital was first developed by Louise Archer and colleagues in the ASPIRES project at King's College London.

Building on five years of research with young people aged 10-14 and their families, ASPIRES found that children from families with more science related-resources (such as parents with scientific hobbies or careers) were more likely to want to pursue science at school and as a career.

The concept of science capital was developed as a way to understand why these science-related resources, attitudes and aspirations led some children to pursue science, while others did not.

Science capital has since developed conceptually and empirically through the ASPIRES projects, Enterprising Science and the Primary Science Capital Project.

The development of these ideas have led the research team to new projects. These include using the concept to create strategies for teaching in primary and secondary schools and to develop resources for more informal science and technology learning settings.

Each of our projects involves external partnerships – current project partners include:

We undertake a range of consultancy activities, from the short to the longer term. We also offer bespoke professional development courses for the Primary / Science Capital Teaching Approach.

Please email us for details ioe.stemparticipationsocialjustice@ucl.ac.uk

For full lists of publications and reports, please visit each of our project pages.

Below are links to a few of our most popular resources:

We have a number of resources translated into other languages. Please get in touch to request a digital copy or if you’d like to discuss translating any of our material. Email: ioe.stemparticipationsocialjustice@ucl.ac.uk

Subscribe for communications from the research team and view previous editions.