Dr Sushma Jansari is the Tabor Foundation Curator: South Asia, at the British Museum. Sushma completed her PhD at UCL in 2016, & alongside her work at the British Museum has her own podcast, The Wonder House. We spoke to Sushma about her time at UCL, her career & her research. 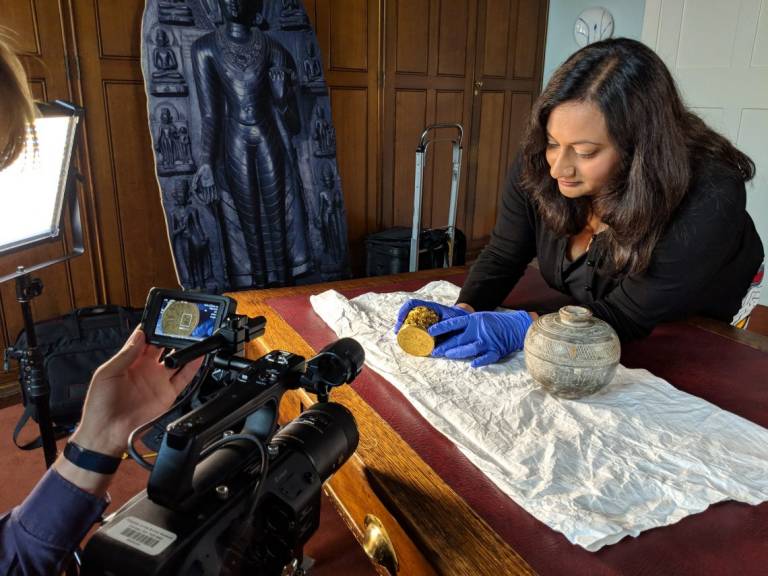 You studied for your PhD at UCL History – what was your thesis about?

It was a fresh look at a range of sources - literary and numismatic, ancient and modern, Graeco-Roman and South Asian - associated with the earliest phase of Seleucid-Mauryan relations. Seleucus I Nicator was one of Alexander’s generals who went on to found the Seleucid Empire, while Chandragupta Maurya overthrew the Nanda dynasty and founded his own Mauryan dynasty in its place. Their empires were contemporary and shared a border, possibly along the River Indus. They met for the first and only time by the banks of the Indus in c.305 BC when they had some sort of military skirmish and concluded a peace treaty with one another.

I explored this moment of contact and its ramifications in three different ways. Firstly, by investigating Megasthenes’ Indica, a document written by the first known Greek ambassador to the Mauryan court, and which survives in fragments in the work of later authors. Secondly, looking at the surviving details of the treaty agreed between Seleucus and Chandragupta as found in Strabo and Appian, and their reception and transformation by British and Indian scholars of the late nineteenth and mid-twentieth century. Finally, I brought together the literary and numismatic sources connected with an Indian ruler named Sophytes who was based in the northwestern regions of the Indian subcontinent during the late fourth century BC, i.e., the period between Alexander and Seleucus’ incursions into these regions, c.326-305 BC. This material was contextualised and reassessed in order to investigate whether Sophytes might have provided a model for Megasthenes’ characterisation of Chandragupta.

How did you find studying at UCL?

Challenging - and not always in a good way! I enjoyed my BA and MA in the History Department but things went pear-shaped during my PhD for a variety of reasons. Professor Eleanor Robson stepped in as my supervisor and helped get the project back on track.

You’re now working as the Tabor Foundation Curator: South Asia at The British Museum - what does this involve?

I’m responsible for a mind-boggling number and variety of objects: all of the ancient to medieval South Asian collections, plus the vast majority of the ethnographic collections from this region, including textiles. As you can imagine, the type of work you can do with such wide-ranging material is extraordinary and I’m currently working on a number of really interesting projects. For example, the Manchester Museum South Asia Gallery in partnership with the British Museum (opening 2022) which involves an exciting, collaborative approach to the gallery with a collective of people, including the local South Asian diaspora communities in Manchester.

I’m also working on series of community-based ‘interventions’ in the Sir Joseph Hotung Gallery of China and South Asia, a gallery that I co-curated and which reopened in 2017. Recently, I started work on a new exhibition project which I’m really enjoying! Alongside this, I am working with colleagues at Brighton University and Lincoln University to supervise a Collaborative Doctoral Project student who is investigating the South Asian collectors/donors represented at the British Museum, and (starting autumn 2020) another who will look at the women collectors/donors who contributed to the South Asian collections at the museum.

Most people tend to focus on the more high profile projects, but, actually, I love spending time doing my day-to-day curatorial duties. These include cataloguing collections and I’m currently working my way through a huge collection of Bollywood film postcards, pamphlets and posters - it’s extraordinary! I get a lot of public enquiries and although it isn’t easy to explain to people that their treasured possessions aren’t always quite as ancient as they thought, it is an excellent way to develop a good eye for ancient/modern/forged objects.

What is the best thing about your job?

The variety of my work makes it both exciting and challenging, and the part that I like best is working with my amazing colleagues - both at the museum and beyond - and our fantastic community partners.

You also have a podcast - The Wonder House - on which you discuss decolonising museums. Can you tell us a little more about the podcast?

This is a real passion project that I work on with Producer/Editor Nick Harris who is also an alumnus of the UCL History Dept. It is a new podcast series that shares some of the most innovative contemporary approaches to decolonising museums so that we are all empowered an inspired to learn and experiment. The idea came about when I was attending and speaking at conferences and workshops that focused on the idea of decolonising museums, and also having really interesting and deeply emotional conversations with people outside of these spaces. I wondered how I could freely share these conversations and the incredible work that people are doing across the UK with everyone who was interested.

After a conversation with Nick, we decided to give it a go. We were very lucky that people I really admire and who I think are genuinely inspirational agreed to appear on the podcast. Season 1 featured Subhadra Das, Miranda Lowe, Sara Wajid, Rachael Minott, Sadiah Qureshi and Margot Finn. You’ll notice that two of the interviewees are from UCL!

If you’d like to listen to the podcast, search for ‘The Wonder House’ on the podcatcher of your choice, or you can stream the episodes here: www.TheWonderHouse.co.uk/podcasts. Follow us on Twitter @TheWonderHouse.