European ambassadors highlight need for solidarity in face of war

UCL welcomed a host of European ambassadors to discuss the values of continued collaboration across the continent to ensure democracy prevails. 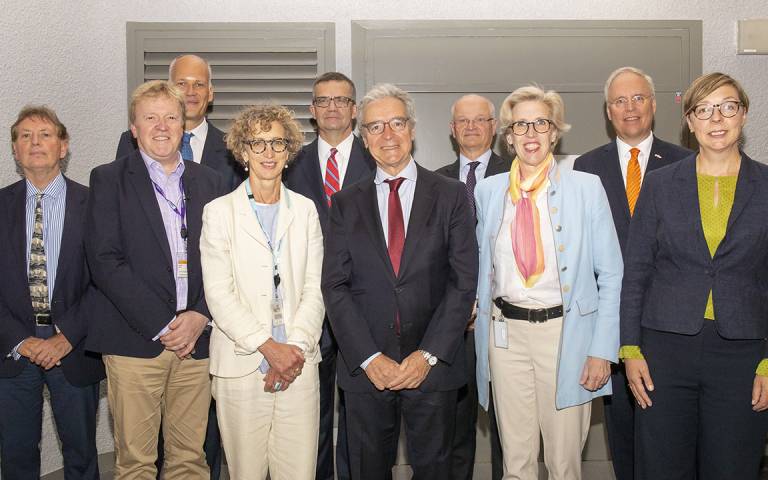 The event formed part of UCL’s Quo Vadis Festival of the Arts and Humanities, taking place from 6-9 June 2022.

It was chaired by UCL’s Vice-Provost (Research, Innovation and Global Engagement), Professor Geraint Rees, who highlighted the strength of UCL’s institutional commitment to Europe, the importance of our European community of staff, students, alumni and partners, as well as the contribution of the arts and humanities as a home for debates about political value and community across cultures and nations.

Professor Rees said: “It’s a difficult time for Europe and European universities – we’re emerging from a global pandemic to a world that’s changed politically, economies that are beset by inflation and other woes, climate change continuing to be a threat to our way of life and our future, and more recently, the return of war to Europe. Now is therefore a really important time to re-examine our values and indeed the function of values in this world.”

The ambassadors spoke of Russia's invasion of Ukraine as a 'terrible wake up call' in direct challenge to European values and the need to bring perpetrators to justice.

Ambassador Kumlin Granit said: "This is not about Ukraine alone, but all of us and our values and freedom. We not only can but must prioritise the defence of our common values.”

Ambassador Wilczek described the ‘wave of hunger that threatens the Global South’ caused by the war in Ukraine as vital supplies are stopped at ports as a ‘real concern’ for Poland. He said: “As Europe, we need to think not only of our security but also the situation of our partners who find themselves in trouble."

The panel also discussed the role of universities around the continent in championing free speech and diversity, and the desire to continue collaboration between UK and European universities post-Brexit.

Ambassador Zimmermann said universities enabled "critique, challenge and discussion of the system", adding: "Freedom of speech is something we live here every day. It leads to the amazing progress Europe has made in so many sectors of life, science, knowledge and technology. That gives our continent a unique strength in the world."

It also features film screenings – including a number directed by UCL students – lectures and book launches.

Professor Hart noted that the European Union’s Charter of Fundamental Rights (2012) states the EU is founded on the ‘indivisible, universal values of human dignity, freedom, equality and solidarity’ and based on ‘the principles of democracy and the rule of law’.

He said: “In 2022, in direct contrast to these values, we seem to be living in a world in which war – or the threat of war – is openly used to de-stabilise democracy, a world in which disinformation and fake news are used to undermine human dignity and freedom, a world in which energy, natural resources and food are weaponised in order to break down solidarity and the rule of law.

“It is clear that Brexit, the COVID-19 pandemic and the war in Ukraine have had their role to play in the birth of some of these tensions in the modern world, but what is also clear is that we are at a turning-point in the history of Europe’s role in the world, and thus it is timely to hold this debate.”

UCL is committed to maintaining and enhancing its rich links in Europe. Europe is the UK’s largest and fastest growing scientific collaborator – with more than a third of EU research papers co-authored with other EU and associated countries - and UCL enjoys close partnerships with leading academic institutions including KU Leuven, Max Planck Institute, and The Neuroscience Center Zurich.

The roundtable builds on strong and longstanding UCL connections with European embassies. In April 2022, EU Ambassador to the United Kingdom, His Excellency João Vale de Almeida, joined the UCL European Institute Advisory Board to help guide its strategic direction.

Professor Mussgnug said: “Our European institutional partners are very interested in working with us. Not only through UCL’s Cities Partnerships Programme in Rome, Paris and Stockholm, and the LERU and U7+ networks that UCL is a member of, but at the individual level there’s a strong sense that our European colleagues value our contribution very much.

"In this difficult and important moment of our shared history, Europe is under great pressure to attend to its foundational values. The roundtable illustrates the great strength of this collective effort. It is also a powerful testimony to the convening power that a world-leading research university like UCL holds and must continue to assert.”

Quo Vadis was launched in 2021 as an online festival for the Arts and Humanities. It succeeded UCL’s Festival of Culture, which took place in person annually for over a decade.