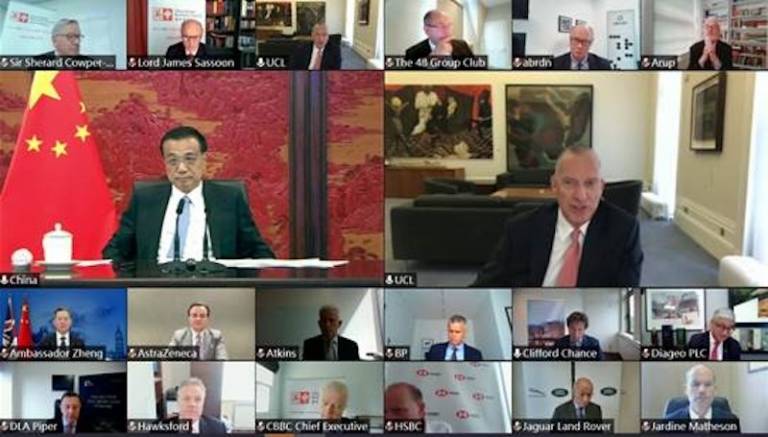 Dr Spence joined senior representatives of 26 multinational companies and institutions for the virtual dialogue, covering topics including bilateral trade and investment, countering the impact of COVID-19 and joint efforts to combat climate change.

He spoke with the Premier on strengthening people-to-people exchange between the two countries.

The event, themed around ‘enhancing mutual trust, expanding cooperation and seeking common development’, was co-hosted by the China Council for the Promotion of International Trade and the China-Britain Business Council (CBBC).

Dr Spence said: “Last year, researchers in the UK and China co-published over 19,000 research papers. Underpinning that remarkable figure are strong people-to-people relationships and a common purpose: the creation of knowledge, the exchange of thought, practice and expertise and a shared ambition to address the world’s most pressing challenges.

“Strong research relationships are central to how UK universities work with our peers in China. Further support can only lead to enhanced understanding, intercultural communication, and the joint creation of even more impactful research.”

He described how UCL’s students and alumni network across China retain lifelong links and continue to work on shared problems for the common good; whether that be urban regeneration, fostering intercultural dialogue or the development of innovative new business.

He said: “UK-China trade has increased against all odds; investment is also on the rise. These trends show that between China and the UK there are not just shared interests, but space for growth. A sound and steady UK-China relationship is also critical for the growth of trade and investment between our two countries.”

The Premier added: “It is important for both sides to remember the big picture. Britain is committed to multilateralism and free trade, and China shares this commitment. Whatever problems there are, we can always work them out through dialogue.”

Referring to China's goal of achieving carbon neutrality by 2060, Premier Li spoke of the importance of responding to climate change. He noted that China, as the largest developing country in the world, has an ‘arduous task’ to achieve low-carbon and green development while achieving modernisation. The Premier said he hoped the UK and China would further step up cooperation on clean energy and green technology to jointly respond to the issue.

CBBC Chair, Sir Sherard Cowper-Coles said: “We greatly appreciate this opportunity to engage with Premier Li. The discussion highlighted how a healthy trade and investment relationship is in the national interest of both the UK and China. As a UK trade minister told Parliament recently, ‘China is probably the biggest single economic opportunity for this country in the coming years’.”