UCL and U of T: Shaping and Connecting Global Cities

UCL and University of Toronto (U of T) celebrated their Strategic Global Partnership by co-hosting an event exploring the role global academic networks play in addressing pressing urban issues. 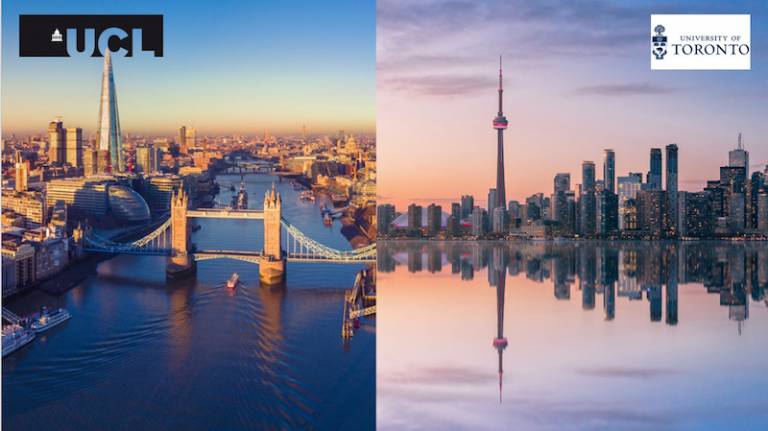 The event, Shaping and Connecting Global Cities, focussed on how research is a critical component of city building, in particular the issues planners, policy makers and citizens need to be thinking about now in order to build the cities of the future.

With a panel discussion moderated by Chris Michael, Editor for Guardian Cities, attendees considered the key challenges facing global cities, such as rapid growth, equality and accessibility, affordable housing and ease of transport.

They discussed how academic research can help address issues through public engagement and working in partnership with different urban actors.

UCL and U of T already have more than 30 established academically-led collaborations in fields spanning all four UCL schools, ten faculties and 30 departments, which have grown organically between members of academic staff.

In a partnership strengthened over the past three years, further collaboration developed through a successful joint seed funding programme supporting diverse areas such as child health, neuroscience and English.

The two universities share a successful undergraduate student exchange programme and co-published more than 1,000 papers between 2012-18.

“In a world where inter-connectedness is no longer a given and global citizenship no longer automatically seen as a positive, the work we do with our international partners like U of T is more important than ever"

“We have a true partnership of equivalence with U of T, one where our academic missions complement one another, and where we have similar values and ethos as world-leading, globally engaged institutions.”

“The university believes that it is through partnerships like this one with UCL that we can have the greatest impact...we share values and a desire to jointly contribute to addressing some of the significant global challenges we face locally and globally”.

“It’s fantastic to see UCL and the University of Toronto in the vanguard of this amazing collaboration. From working on climate change issues through to promoting investment and the global issues that impact cities – all of this nests really well with tonight’s conversations. I’m looking forward to seeing more of this activity.”