UCL has committed to further collaboration across five academic areas with the University of Tohoku, Japan 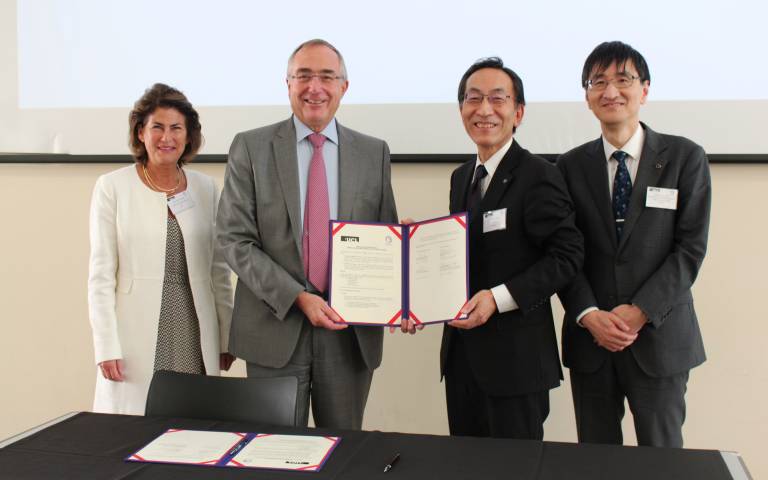 Professor Hideo Ohno, the University of Tohoku’s President, along with three Vice Presidents and more than 40 academics from Tohoku, joined a tour of the UCL campus and met with academic staff from across the university.

The tour was followed by a Presidential meeting and introductory speeches from both Presidents. They then signed a Memorandum of Understanding (MOU).

“It’s a relationship that began in 1863, when the ‘Choshu Five’ risked capital punishment to travel to the UK, followed by the ‘Satsuma 19’, who were among UCL’s first cohort of international students,” he explained.

Professor Arthur also used the welcome to emphasise the shared values between UCL and Tohoku. He said: “We share the common ambition of remaining globally and outwardly engaged… Global partnerships like the one we’re developing with Tohoku is how higher education can play a part in solving pressing world challenges.”

Tohoku’s President Professor Ohno echoed this sentiment. He said: “We share values including advocating a research first principle, and we share an ‘open doors’ principle – we were the first university in the country, like UCL, to accept female students.”

Professor Arthur explained that the new UCL-Tohoku MOU was intended to signal a clear commitment to their partnership, building on the institutions’ existing collaborations in neuroscience, disaster science, data science, materials science and higher education.

“UCL and Tohoku will be setting up a joint seed-funding scheme to support the exchange of ideas,” he said.

Following their tour of the UCL campus, academics from UCL and Tohoku working in similar fields took part in workshops, over a day and a half, to develop collaboration and idea sharing.

Professor Ohno welcomed the commitment to further collaboration, saying: “The 113 existing joint publications is an impressive number, but with the workshops we have today and tomorrow, I’d expect it to be higher in the next five years.”